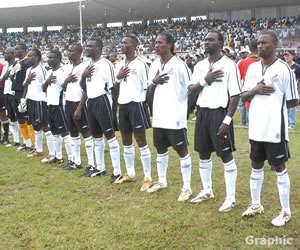 ... Laryea Kingston's ban still on The Ghana-Iran friendly scheduled for March 29 has been called off. GFA spokesman, Randy Abbey, said the cancellation was due to the inability to get the full compliment of the national team squad.

Blackstars are now focusing on the South Korean friendly on 4th June in Scotland .

In another development, FIFA has confirmed that Laryea Kingston's ban still stands. This refutes an earlier report from Abedi Pele that, the player is eligible to play. FIFA has sent confirmation letter to GFA resisting the player to feature in the upcoming world cup.

Free SHS Will Collapse If You Vote NDC Back To Power — NAPO ...
11 minutes ago