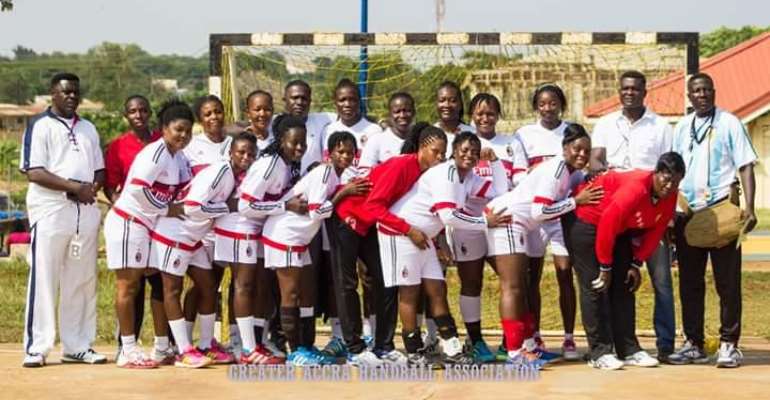 The Burma Camp Handball Court was filled with mixed feelings as spectators of both teams were present in their numbers but Army men showed class as they brushed aside Prisons in the first half with 12-11 scoreline. Both teams were eager to win but Army goalkeeper Raphael Hagan denied team Prisons from scoring on several occasions.

Prisons came into the second half of the game to pay their goal deficit but the Soldiers hold their defense firm and frustrated Prisons to the last blast of the whistle.

Army exhibited a lot of determination and Class over Ghana Gas Knockout Champions with a stunning performance to maintain their stands on the league table. Army entertained their home fans with high-quality handball skills from set-pieces to defense and goalkeeping won them applaud from the spectators. 26-21 scoreline was enough for the Soldiers to grab their maximum win.

Enoch Quao of Prisons was the goal and 2 red cards were a book by Prince Osei and Kennedy Awuah of Army.

Army women, on the other hand, lost their match to Prisons with a 17-19 final scoreline. Prisons women who were denied access to the Knockout trophy by Air Force showed class and redeemed their fate over another Camp favourites. Diana Akumasi was a delight to watch as she bagged 10goals to become goal queen.

Police had a walkover from Great Osu Fingers. After 25mins of handball running time, a walkover advantage was given to team Police plus a maximum point.