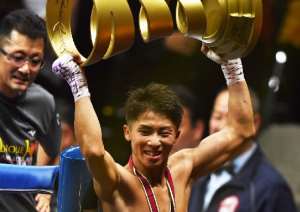 Naoya "The Monster" Inoue has rarely faced adversity during his reign of terror through boxing's smaller weight classes, but when he finally did against Nonito Donaire, Inoue came through like a champion in a punishing contender for fight of the year.

Inoue, bleeding from a cut over his right eye and nose and hit harder and cleaner than he ever had been, scored an 11th-round knockdown en route to a unanimous decision victory over the probable Hall of Famer on Thursday before a sellout crowd of 20,000 at the Saitama Super Arena in Saitama, Japan.

The judges had it 117-109, 116-111 and 114-113 for Inoue, who unified bantamweight world titles and won the Muhammad Ali Trophy as the winner of the eight-man World Boxing Super Series.

"Donaire was very, very tough for me," Inoue said through an interpreter. "I see Donaire as a true champion. He's very strong but I was victorious. I need to get stronger."

After the 118-pound world title bout came the announcement that has been one of boxing's worst-kept secrets: Inoue and Hideyuki Ohashi of Ohashi Promotions have signed a multiyear co-promotional deal with Top Rank that will bring Inoue to the United States to fight on ESPN platforms in early 2020.

But that contract was contingent on Inoue, the No. 1 seed in the World Boxing Super Series, prevailing against the old war horse and four-division world titleholder Donaire, who was unseeded.

Inoue (19-0, 16 KOs), 26, of Japan, was ranked fourth in the latest set of ESPN pound-for-pound rankings released Tuesday. The winner of world titles in three divisions (junior flyweight, junior bantamweight and bantamweight), Inoue made his third bantamweight title defense in what was the toughest fight of his career.

He had stormed through the tournament, destroying former world titlist Juan Carlos Payano with a highlight-reel first-round knockout to retain his secondary title in the quarterfinals in October 2018 and then blitzed Emmanuel Rodriguez in two rounds to unify two belts in the semifinals in May. Donaire was as sturdy as they come, but Inoue notched the win to add Donaire's "super" title to his growing collection.

Next stop for Inoue is the United States under the new deal with Top Rank. The plan is for him to come to the U.S. for two fights in a row in 2020 before a trip back to Japan for a third fight later next year.

"Naoya Inoue is a generational talent, the sort of fighter who comes around once a decade," Top Rank chairman Bob Arum said. "He is already a superstar in Japan, and he will be major star stateside in no time. You are looking at an all-time great who is entering the prime of what will be a historic career."