Guardiola Is The Best Manager In The World, Says Klopp 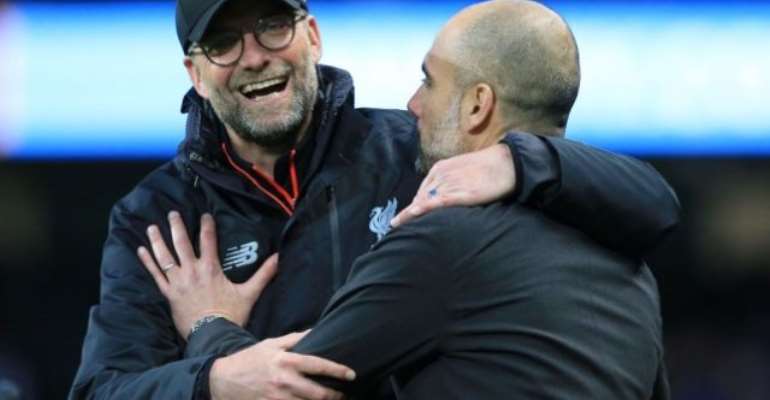 Liverpool manager Jurgen Klopp has hailed Manchester City boss Pep Guardiola as the best manager in the world as the Premier League rivals gear up for Sunday's top-of-the-table clash at Anfield.

Leaders Liverpool have a six-point advantage over the defending champions and with the title race increasingly a two-horse one, Sunday's showdown could go a long way to deciding it.

Klopp meanwhile, who has taken a dig at City's "tactical fouling", drew a line under the verbal sparring on Thursday.

"We constantly get asked questions and sometimes we say what is in that second in our mind without thinking about anything else, that we are in public, that there is a camera," Klopp told Sky Sports.

"I couldn’t have more respect for Pep Guardiola, that’s how it is. I’ve known him for so long, for me still it’s a big thing to be his contender.

"For me he's the best manager in the world and we have the chance to win against his team which is very difficult but possible. That's enough for me."

Klopp dismissed a suggestion that the match was as much one Liverpool could not afford to lose as must win.

"We want to win and we try everything to make that happen, which is difficult enough. And then after that we will see how the situation is and use that situation.

"But it's a big one, we know that. The whole world will be watching that game, I would 100%, everybody I know will, so it's a massive one."

Champions League winners Liverpool lost at Manchester City last season after a goalless draw at Anfield and were beaten to the title by a single point.

"Last year's performance of City at Liverpool was probably the biggest show of respect I ever got, that one of my teams ever got, because they played different to what they usually do," said Klopp.

"I expect a tight game. How exactly it will be, I don't know."