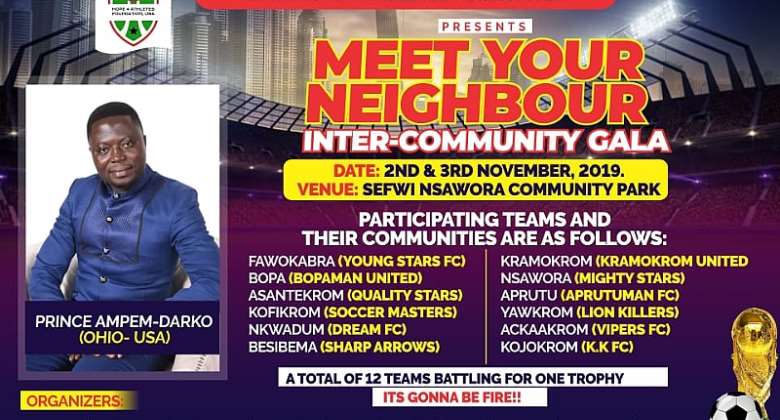 A football game organized by Ohio- US NGO by name Hope for athletes foundation in partnership with Prince Ampem Darko, a native of Sefwi Akontombra ended in a thunderous appreciation by all and sundry who took part in the game in Sefwi Akontombra on the 2nd day of November 2019.

Hope for Athletes Foundation is anchored on the need to bring the best out of young talented youth in Sefwi Akontombra District as a means to ensure that, those who have various skills in the arena of athletics and others reach their full potentials.

The 2 days event which started on 2nd november and ended on 3rd november 2019 at Sefwi Nsawora Community park was participated by 12 communities with Sefwi Ackaakrom Vipers FC emerged as winners after beaten Asantekrom Quality Stars through penalty shoot-outs.

Speaking to GBC/UNIIK FM reporter, Mr Ampem Darko, said apart from ensuring outstanding unity among the people in the various named communities, the avenue provided the youth to showcase their hidden talents. According to Mr. Ampem Darko, the game was for talented footballers within the Akontombra District to be scouted for Premier and Academy clubs.

He expressed his satisfaction in achieving success in the games with incident-free and promised to make it continues for the benefit of the very talented youth within Sefwi Akontombra and its environs.

Mr Ampem Darko admitted challenges from some political leaders who attempted to stop the ongoing activities with security issues when actually that was not what they meant. He urged the communities to keep united after the league since it was dubbed," meet your neighbour inter-community game". The inspection of players was done by Chief of Fawokabra, Nana Agyeiba Agyei ii, together with Chief of Wasampo Nana Kofi Amoah ii, infront of about two thousand 500 spectators.