UCL: Valencia Roar Back In Second Half To Thrash Lille 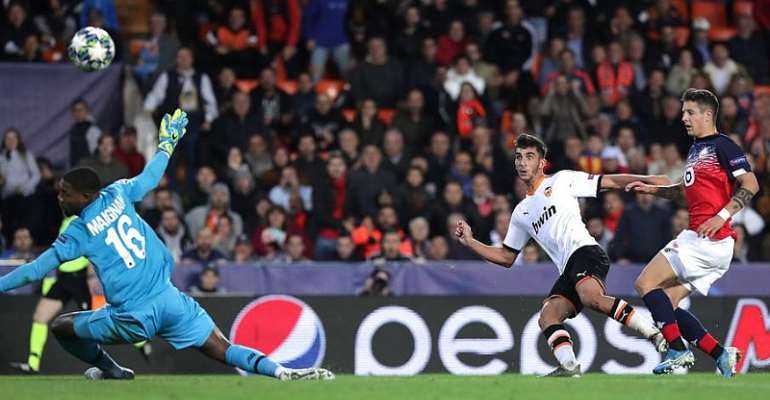 Valencia's hopes of reaching the last 16 of the Champions League for the first time in six years received a boost with a 4-1 win over Lille in Group H on Tuesday.

Nigeria forward Victor Osimhen gave the visitors a first-half lead before Dani Parejo, Geoffrey Kondogbia, Ferran Torres and an Adama Soumaoro own goal claimed all three points for the Spaniards.

Valencia's victory moves them level on seven points with Chelsea and Ajax, who drew 4-4 in the other game in the group.

The defeat means Lille need to win their two remaining fixtures and hope Valencia beat Chelsea and Ajax if they are to reach the last 16.

The French club's coach Christophe Galtier made three changes from the weekend's loss at Marseille including bringing in Osimhen for Jonathan Ikone, who was ruled out after a car accident.

Albert Celades brought in centre-back Gabriel for Mouctar Diakhaby as the French youth international served a suspension for a red card received in the reverse fixture in October.

The visitors dominated the early moments thanks to their high press and took a deserved lead after 25 minutes.

Valencia captain Parejo's attempted pass inside Lille's half was deflected into Osimhen's path.

The 20-year-old sped past centre-backs Gabriel and Ezequiel Garay before nutmegging Jasper Cillessen for his second goal in four European games this season.

The Spaniards, who sit in 13th in La Liga, were level 20 minutes into the second half.

Parejo made up for his first-half error by delicately chipping a penalty kick after referee Sergei Karasev punished Jose Fonte for handball.

Celades' side pressed on looking for the winner and Osimhen threatened the hosts' back four with his searing speed on the counter-attack.

Valencia's efforts were rewarded after 82 minutes.

Left-back Jose Gaya played in a cross and Soumaoro's attempted clearance trickled over the line at the back post.

They extended their lead two minutes later with a superb long-range strike from French-born Kondogbia and Torres hit home in the 90th minute to seal the three points.

Valencia host Chelsea in the next round on November 27 and Lille play Ajax in northern France.