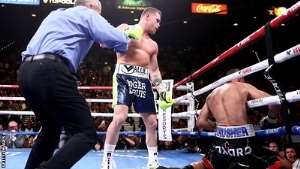 It proved a close fight which failed to ignite before an explosive combination from Canelo ended Kovalev's night.

A cagey encounter at the MGM Grand appeared to be heading to a 12th round and one for the judges to decide before a left hook-right hand combination came from nowhere and left Kovalev floundering on the ropes.

Judges had Canelo slightly ahead at that point on their scorecards.

Watch highlights of the bout below;