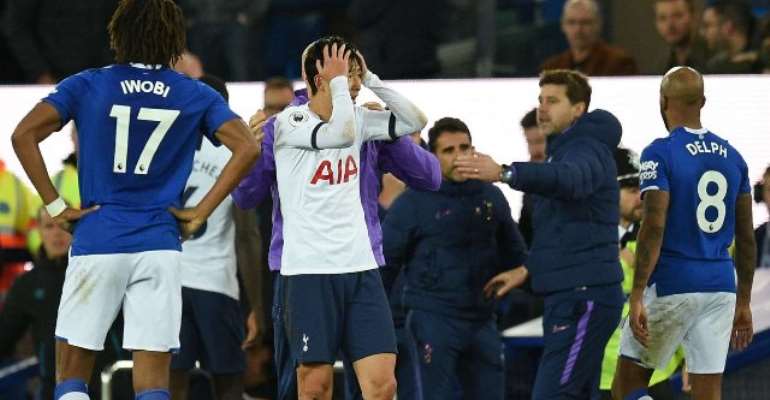 Son Heung-min was “devastated” following his tackle that left Everton’s Andre Gomes with a horrific leg injury during Tottenham’s 1-1 draw at Goodison Park on Sunday, according to Dele Alli.

The incident occurred in the 77th minute at Goodison Park with the visitors leading 1-0, and resulted in a red card for the South Korean as horrified players were visibly shaken by the extent of Gomes’ injury.

Son went in with a lunging tackle on the midfielder as he sought to win back the ball, but failed to make contact with the ball as his opponent went down in pain.

Alli Sky Sports: “I didn’t want to look too much at what happened [to Gomes]. All I can do is send him my best wishes and wish him a quick recovery.

“Son is devastated, he’s in tears but it’s not his fault. He’s one of the nicest people you would want to meet and he’s not like that.

"He can’t even lift his head up he’s crying that much in the dressing room.”

The forward was originally shown a yellow card for the challenge, which was then changed to a red once the seriousness of the injury became apparent and he left the pitch in tears.

Former Liverpool defender Jamie Carragher told Sky Sports: "If you give a red card for that, every challenge is endangering the safety of an opponent. We didn’t want to show it on the replay but I could see it in front of me.

"He actually gets injured in between the two challenges in some ways, and the Son challenge does force him to fall as his leg, unfortunately, gets stuck underneath him just before Aurier comes in.

"I think in the future of this game and on the back of this injury, I don’t think it’s a red card for Son but maybe in the future, if anyone makes a challenge when they know they can’t win the ball, which is what Son has done, I think that may be the next step that we take the game in terms of red cards."

Ex-Spurs striker Gary Lineker said on Twitter: “Son clearly massively upset. Without the injury he wouldn’t have been shown a red card. He’ll care less about that than injuring a fellow professional so seriously. Such a shame.”

Spurs looked to have done enough to see off the hosts thanks to a second-half goal from Dele Alli who fired home after a dire first 45 minutes.

But Everton hit back against the 10 men, with striker Cenk Tosun powering home a bullet header deep into stoppage time after the game had been badly disrupted by the injury to Gomes.

The result leaves Tottenham mired in the bottom half of the table and have now failed to win on the road since January, whilst Everton sit 17th, one position above the relegation places.