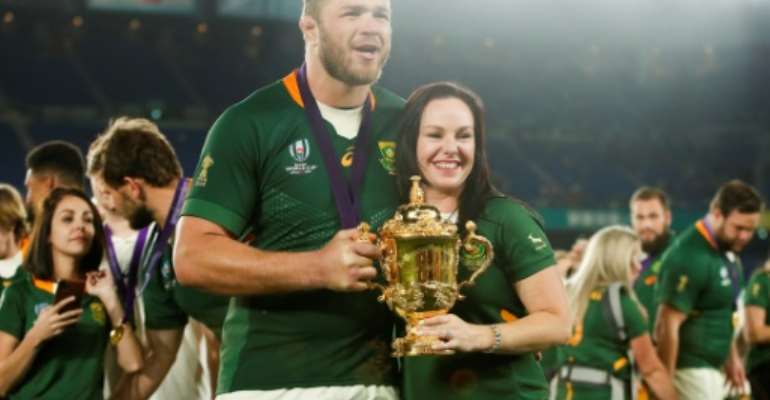 South Africa's number eight Duane Vermeulen said the team is about much more than brawn. By Odd ANDERSEN (AFP)

South Africa's World Cup victory over England may have been based on a no-nonsense defensive game plan, but number eight Duane Vermeulen said two stunning tries showed they are also capable of producing "circus act" rugby.

For all the lightning footwork of Cheslin Kolbe and Makazole Mapimpi, two crucial cogs for the World Cup-winning Springbok machine were the eight-nine axis of Vermeulen and Faf de Klerk.

That was never more on show than in Saturday's final where South Africa walloped England 32-12, the two wingers scoring a late try apiece, with fly-half Handre Pollard kicking 22 points.

Up against England's "kamikaze kids" pairing of Sam Underhill and Tom Curry, Vermeulen led a destructive Bok back row also including skipper Siya Kolisi and Pieter-Steph du Toit that nullified their threat at the breakdown.

De Klerk's blond locks were conspicuous as he and Vermeulen charged around in a suffocating Bok defence.

"We know England had two fantastic young fetchers in Underhill and Curry and they've been superb this whole tournament," Vermeulen said.

"We know we had to do something at the breakdown, in a way we got a few turnovers, they got a few, and it's fantastic to walk away with this win."

"England had a fantastic game against New Zealand (winning 19-7 in the semi-final) with their physicality, but we also pride ourselves on that."

While admitting the team were "really happy not to concede a try", Vermeulen said the fact they scored two of their own showed they were a team not shy of trying things.

"You still have to bring what makes you special, we say your 'circus act', you've got to bring that to the field. Because it's a final, don't be scared of making mistakes, rather try something than just playing it safe."

'Bring the country together'

De Klerk was simply sensational for South Africa over the duration of the World Cup, saying he was loving the "amazing vibe" having finally won despite going down 23-13 to the All Blacks back in their opening pool match.

"A lot of people doubted us, especially after that first loss to New Zealand, but we fought back and had an unbelievable game against England," said the scrum-half, who plays his club rugby alongside England flanker Curry at Sale in the English Premiership.

"The most important thing, especially in play-offs and finals, is to buy into the plan and stick to it. We've all done that and it showed we can score tries as well. To get that victory is amazing."

"There's a lot of belief in the group. We've got the right people in right positions, especially on the coaching staff," he said. "They've been absolutely amazing and we've all bought into what they want to do."

Vermeulen added that the team's performance went much deeper than just on the pitch.

"We were doing it for each other, but we're also doing it for 57 million people back home in South Africa," he said.

Frans Steyn, the sole Bok to have played in the country's last World Cup win in 2007, added: "It's huge, as the country is in a worse position now than it was then.

"There's been numerous droughts recently and a ton of other stuff. Hopefully it can bring the country together."