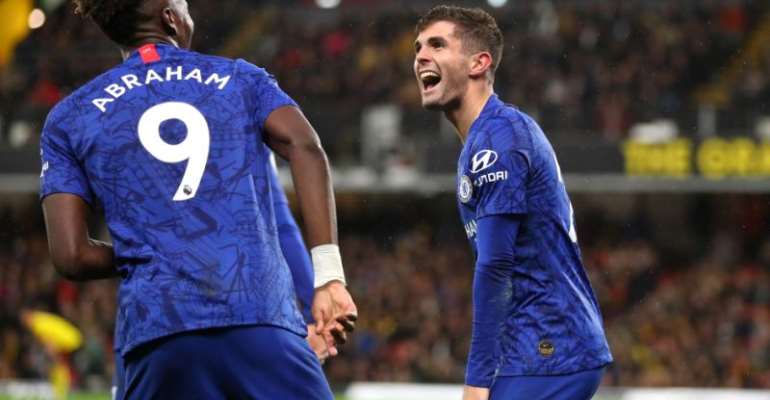 Chelsea climbed to third place in the Premier League as Tammy Abraham and Christian Pulisic sealed a 2-1 victory at lowly Watford on Saturday.

Frank Lampard's side bounced back from their midweek League Cup defeat against Manchester United to make it five successive league wins.

The Blues have won eight of their past nine matches in all competitions as Lampard continues to make a good impression in his first season in charge.

His decision to go with unproven youngsters like Abraham, who opened the scoring, has been a shrewd move, while Pulisic is justifying his hefty price tag after starting the season on the bench.

Gerard Deulofeu's late VAR-awarded penalty came too late to stop Chelsea recording a seventh successive away win in all competitions.

They are just two points behind second-placed Manchester City despite being unable to sign players in the summer due to a transfer ban.

But with a trip to City looming and Champions League ties against Ajax and Valencia on the schedule, November will provide much sterner tests of Chelsea's progress than this stroll in the autumn chill at Vicarage Road.

Watford could have lost by a much bigger margin and they remain bottom of the table, without a win in the league this season.

Chelsea made a blistering start that reaped an immediate reward when Abraham accelerated on Jorginho's sublime pin-point pass and lifted a cool finish over Ben Foster.

It was Abraham's 10th goal of his breakthrough campaign ending a five-game goal drought for the young England striker, who has scored seven goals in away games this season.

Just as significantly, Jorginho's role in the goal indicated the Italy midfielder's improved form in his second season with Chelsea.

Jorginho was disliked by Chelsea fans last season for his anonymous displays but has already been involved in more Premier League goals (one goal and two assists) than in the whole of the previous campaign (two goals and no assists).

That was a rare threat from the hosts and only Foster stopped Chelsea's dominant display yielding more goals.

Foster kept out Abraham with a fine save, then from Willian's corner, Pulisic looped a header that forced an even better stop by the Watford keeper.

Having won their previous six games on the road in all competitions, Chelsea were in confident mood and Mason Mount was inches away from their second goal when his long-range blast was pushed onto the bar by Foster's fine save.

Chelsea had lost just one of their last 58 league games when leading at half-time, at Wolves in December 2018.

Foster was all that stood between the Blues and another away-day success as the 36-year-old denied Mount with another superb stop early in the second half.

Pulisic had scored a hat-trick in last weekend's win at Burnley and the United States winger was back on the scoresheet to put the result beyond doubt in the 55th minute.

Abraham was the provider with a low cross and Pulisic evaded Watford's dozing defence to tap in from close range.

Boos rang out when Daryl Janmaat was replaced by Kiko Femenia as Watford fans barraged boss Quique Sanchez Flores with chants of "you don't know what you're doing".

But Watford were given a controversial 80th-minute lifeline when VAR ruled that Jorginho had caught Deulofeu with a trip that drew a theatrical fall from the winger.

Deulofeu dusted himself down to slot home the penalty and set up a tense finale.

Foster, up for a last second free-kick, almost gave Watford a dramatic point, but his header was brilliantly saved by Kepa Arrizabalaga, who was mobbed by celebrating team-mates at the final whistle.