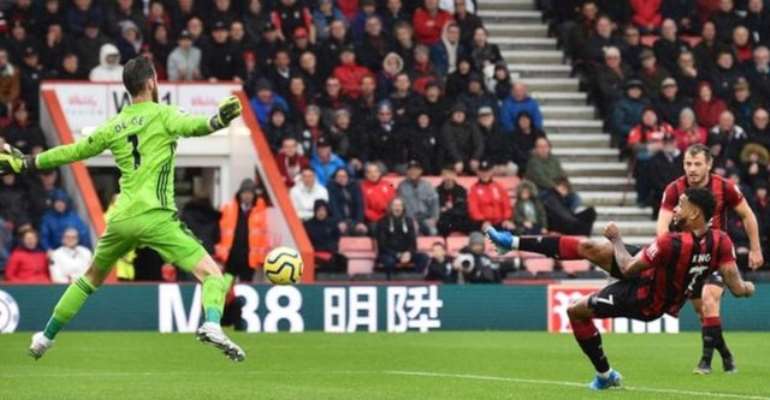 Joshua King's goal on the stroke of half-time gave Bournemouth their first win since September and brought Manchester United's three-match winning run to a halt.

United made a positive start after going four unbeaten but their new-found belief seemed to evaporate in driving rain and swirling wind on the south coast.

The hosts gradually got a foothold in the game and former United trainee King struck moments before the break to claim Bournemouth's first goal in nearly six hours.

The 27-year-old striker, who scored the winner in Bournemouth's only previous Premier League win against the Red Devils in 2015, was allowed to chest down Adam Smith's cross into the box before turning Aaron Wan-Bissaka and volleying between David de Gea's legs from close range.

The Cherries carried that momentum into the second half and Harry Wilson twice went close to doubling their lead as United struggled to regain the dominance they enjoyed early on.

The late introduction of Mason Greenwood lifted them and the young striker hit the post moments after coming on but United could not prevent Bournemouth securing their first win in six, which sent them back above the Red Devils to sixth in the table before the rest of Saturday's games.

United, though, have failed to keep a clean sheet in any of their last 11 Premier League away games and their haul of 13 points is their lowest after 11 matches of a league campaign since 1986-87 (11).