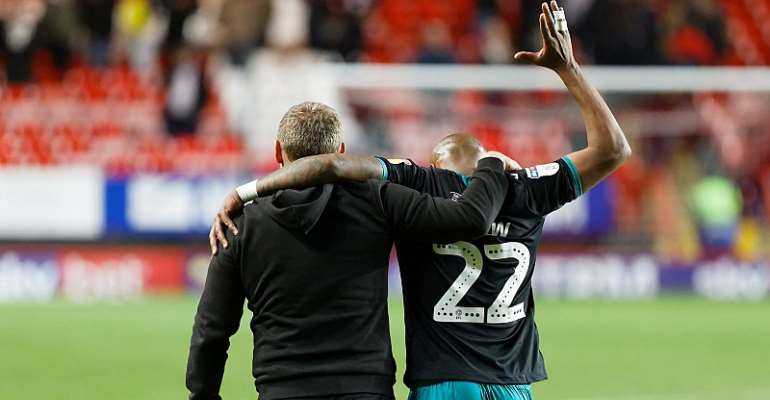 Ayew has been impressive for the Swans in the ongoing Skybet Championship with Coopper praising the Ghanaian’s positive influence on the dressing room.

Matt Grimes was confirmed as Swans skipper in the summer, and head coach Cooper has now revealed Ayew is his deputy.

And, while keen to point out there are no shortage of experienced heads offering leadership in a young squad, Cooper praised the impact the former Olympique Marseille forward has made since returning from African Cup of Nations duty late in the summer.

“Andre is a senior figure and a very positive influence around the group,” said Cooper.

“We are very lucky, we have players like Wayne Routledge, Nathan Dyer and Kyle Naughton too.

“We know there is a bit of a status to being captain or vice-captain, but we do have senior figures in the squad.

“Andre has got the attributes to lead, and he does it well through good and bad moments and long may that continue.

“It’s good for Matt as well to have players like Andre, Wayne and Nathan around him.

“Matt has thrived in the role, there is no doubt about it. But I know he is open-minded enough to seek advice and I know those boys will give it to him in a constructive and helpful manner.

“Andre is a good role model and leader, I think there is a good culture here everyone helps each other but pushes each other. That’s a good thing," he added.

Swansea City will travel to Wigan on Saturday, November 2.