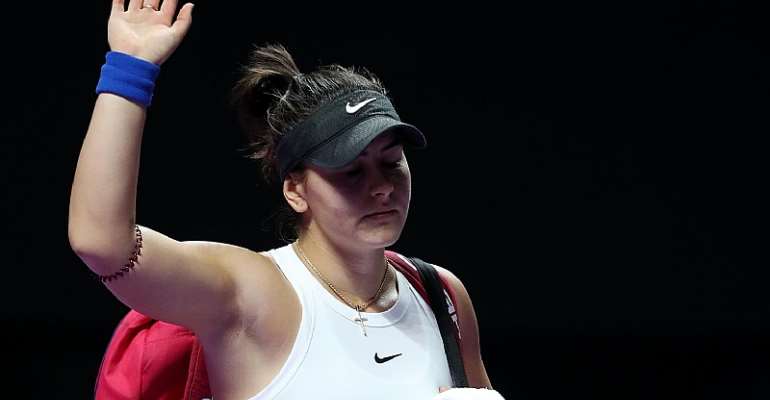 Canada's Bianca Andreescu says she is withdrawing from the WTA Finals due to an injury to her left knee.

Andreescu said results from an MRI on Thursday convinced her she should not play her final round-robin match against Elina Svitolina on Friday at the season-ending, US$14-million event.

The 19-year-old from Mississauga, Ont., was eliminated from championship contention after retiring from her match against Karolina Pliskova on Wednesday as a result of the injury.

"It's very disappointing," said Andreescu, who shook hands with Pliskova after losing the first set 6-3, dropping her record to 0-2.

"It's the last tournament of the season. You want to go all out, but stuff happens. You just got to take a step back, re-evaluate. That's what I did. I think this is the best decision for me right now."

American Sofia Kenin will replace Andreescu for the match against Svitolina.

Andreescu said she twisted her knee during a forehand return in the fifth game against Pliskova.

"I heard a crack," she said. "After that, it was hard to put pressure on it. On the spot the physio thought it was my meniscus, so she taped it up. It was really hard to bend with the taping and the pain kept getting worse, so I had to stop.

"I fought with what I had, but I didn't want to get it worse."

The decision ends a year which was extremely successful, in spite of several injuries. Andreescu reached a Canadian record No. 4 in the women's tennis rankings after winning her first three career tournaments, including the U.S. Open for her first Grand Slam title.

In between winning her first and second events, Andreescu was sidelined for almost four months because of a shoulder injury.

Time off
The Canadian hurt her back in her opening match at the WTA Finals, a loss to Simona Halep, before suffering the season-ending knee injury.

"Definitely, I need some time off," she said. "It's been a short yet long season at the same time for me. I'm definitely going to take time off, be with my family, with my friends, recoup, then start my pre-season.

"I'll become even stronger for 2020."
Andreescu is the second player to pull out of the WTA Finals during the event because of injury. Japan's Naomi Osaka dropped out because of a shoulder injury and was replaced by Kiki Bertens.