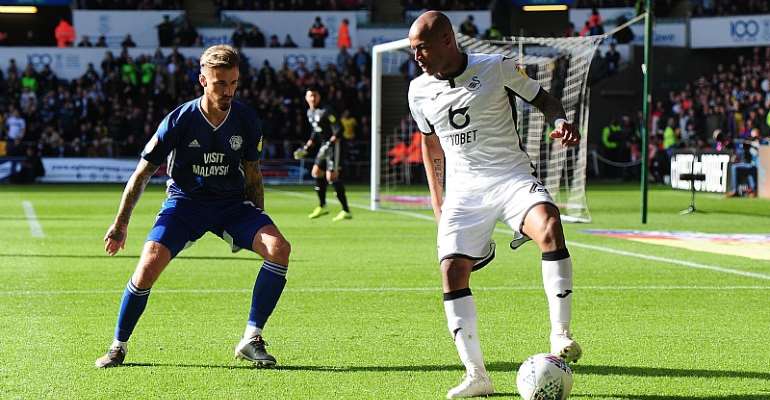 Ghana international, Andre Ayew has reiterated that it is important Swansea City build on their derby day victory by backing it up at Wigan on Saturday.

After a disappointing home defeat to Brentford, Steve Cooper’s men responded in the best possible fashion by sealing a 1-0 win over Cardiff thanks to Ben Wilmot’s first senior goal.

The result was enough to move the Swans back into the play-off places, and there will be all-but a third of the season in the books come the conclusion of the clash with the Latics.

Paul Cook’s men have been in fine form, at the DW Stadium, winning their last three.

Swansea meanwhile, are the only remaining side in the Championship with an unbeaten away record.

It sets up an interesting encounter, and one Ayew feels the Swans must get a positive result from.

“Saturday’s match against Wigan is a very important game for us, we need to try and get back-to-back victories,” said the forward.

“Wigan are a good team at home, we need to prepare very well and get ready to come back and face them after winning last weekend.

“I know the gaffer and the staff are putting things together to ensure we are as ready as we can possibly be.

“It’s no good just winning one game, we have to string results together.”

Andre was named the man of the match against Wigan.

Coach Kwesi Appiah has named the 29-year-old in his 23 man squad for the 2021 Africa Cup of Nations doubleheader qualifier.