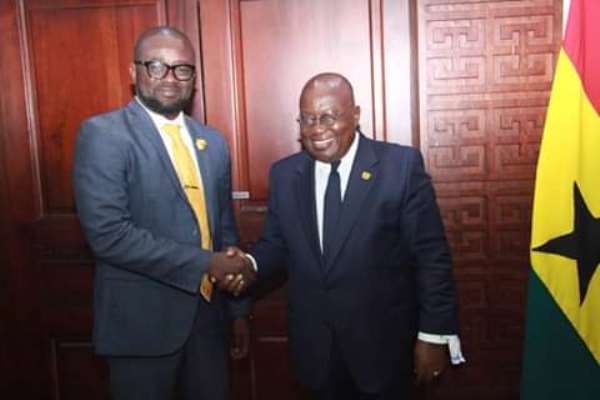 President for the Republic of Ghana, His Excellency Nana Addo Dankwa Akufo-Addo has assured the newly-elected president of the Ghana Football Association (GFA) of total support from his government.

The owner of Dreams FC who runs the prestigious MTN FA Cup Competition was voted for as the new head of the country’s football governing body last week where he beat strong competition from George Afriyie and Nana Yaw Amponsah.

As he begins work to restore football in the country to its glory days, he honored a courtesy call on President Nana Addo at the Jubilee House earlier this evening.

Among many things he discussed with the first gentleman of the land, Kurt Okraku asked for support from the government to ensure his tenure as president becomes successful.

Replying to that plea, His Excellency Nana Addo indicated that the new GFA boss will have the needed backing his administration may require.

“You have to know that, so long as I’m on this seat, you have my support by the way you want to take Ghana football; hopefully it’s the same place I want to see it, he said.

President Nana Addo further charged Kurt Okraku and the new GFA to work hard in order for the various national teams to win laurels for the country.

“It’s not right that so many years have passed before we won the great cups again. We need to go back to the winning ways that used to characterize our football. You have a big task and a lot of goodwill, build on it”, President Nana Addo stressed.