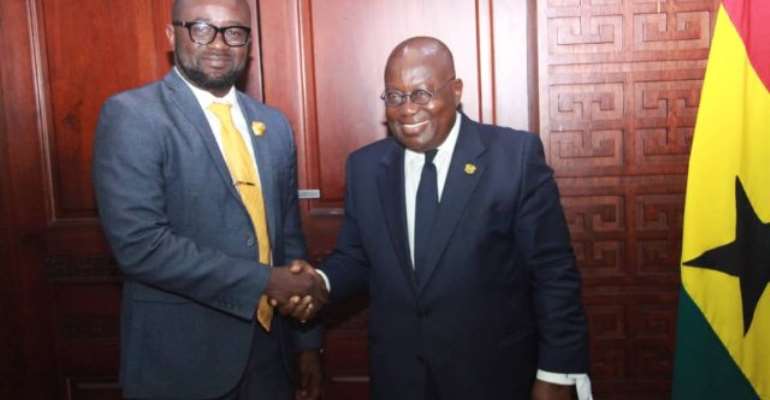 On Wednesday, Mr Okraku visited the Jubilee House after he was elected as the new head for the country's football governing body.

During the meeting, President Akufo-Addo indicated he was distressed by reports of corruption in the FA but is confident the new leadership will lead a process to ensure openness in the administration of the game.

“I had no interest in wanting to control Ghana’s football. But I felt that government was duty-bound to step in to take some actions to stop the wrong and hopefully institute reforms that will enable Ghana football to take on a new leave,” the President said.

“I was informed that we had a new young vibrant boss of the GFA, I was very happy about it. And seeing you confirms what I heard about you.”

President Akufo-Addo promised to provide all the necessary support the GFA President needs to take Ghana football to the next level.

Mr Okraku was elected the new GFA President after his closest rival George Afriyie conceded defeat during the third round of voting at Friday’s Elective Congress held at the College of Physicians and Surgeons in Accra.

Presenting himself to the President, Mr Okraku said a comprehensive programme is underway to first change the negative image of the FA and ensure the country is back to winning ways.

He said that “big lessons have been learnt from June 12 last year and it is my commitment to ensure that we build an association that embraces all the principles of good governance. We are talking about transparency, accountability, internal auditing system.”

He noted, football is the sport that unites the country and provides numerous opportunities, therefore, it needs absolute attention from both the association and government.

Mr Okraku has a huge task in the next four years.

ASEPA petitions Presidency for names of members on committee...
36 minutes ago