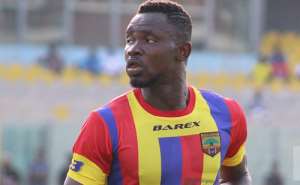 Ghana Premier League giants, Accra Hearts of Oak has wished former player Vincent Atingah a happy birthday through a post on their official Twitter handle as the defender turns 25 today.

The center-back enjoyed a good stint with the Phobians in 2017 where he managed to establish himself as a key figure and a fan favorite. Having spent two years with the Accra-based club, he later secured a transfer to Albanian side FK Tirana.

Following an impressive performance with the side, he is now enjoying his football at Kuwaiti League side Al Qadsia.

As he marks his 25th birthday today, Hearts of Oak has celebrated their former center-back with a warm post on their twitter page.

The post reads, “Everyone at Hearts Of Oak extends best wishes to our former defender Vincent Atingah who celebrates his birthday today. Atingah, who currently plays for Kuwaiti League side Qadsia, was part of the Ghana side that won the 2017 WAFU Cup of Nations in Ghana”.

Atinga continues to shine in the Kuwait top-flight league and has been tipped to eventually find his way into the Black Stars team.