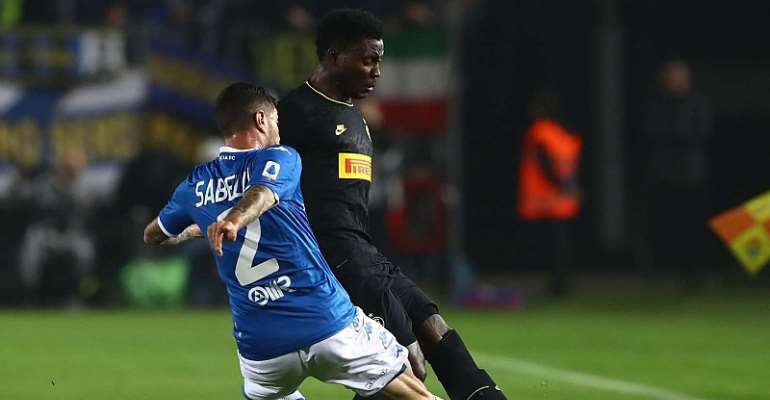 Ghana midfielder, Kwadwo Asamoah produced another stunning performance as Inter Milan bounced back to winning ways with a 2-1 triumph at Brescia on Tuesday in Serie A.

Antonio Conte’s side were looking to return to winning ways are drawing with Parma over the weekend, the second time they dropped points this season.

The 29-year-old was rested on that occasion but was back in place of Cristian Biraghi, and it was the strong strike partnership of Lautaro Martinez and Romelu Lukaku which scored in either half before the visitors clawed one back via a Milan Skriniar own goal.

It proved to be only a consolation with Inter taking home all the points.

The former Udinese and Juventus ace was substituted in the 81st minute for Biraghi, making 19 key passes (70.4% accuracy) with 47 touches.

Asamoah was also successful in his three dribbles as well as his sole aerial duel, while winning four of eight ground duels. He made three clearances.

Inter are now back to the summit of the log but will be hoping Juventus drop points when they host Genoa on Wednesday night.

Kwadwo Asamoah has been dropped from Ghana's squad ahead of the 2021 Africa Cup of Nations qualifiers against South Africa.