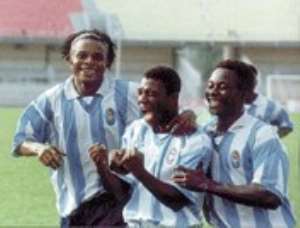 Accra Great Olympics have qualified for next season's premier league with a game to spare, following a 2-1 win against B.A United.

Great Olympics who needed just a point to advance scored twice before the former premier league outfit B.A United drew one back.

Fans of the wonder club, rushed onto the field to celebrate qualification to the premier league with the players at encounter at the Nkawkaw Park.

The former Premier league side, rooted bottom on the log, could only manage a goalless draw against another former top-flight club, Swedru All Blacks.

Meanwhile the Division one league board says it has postponed indefinitely the last round of matches in the first division playoffs, originally scheduled for this Sunday.

The decision has been taken to put the last matches on hold pending the final determination of some protest cases before the disciplinary committee.

Four cases relating to unqualified players are currently before the Committee for determination.

The cases involve five of the six clubs engaged in the national middle league.