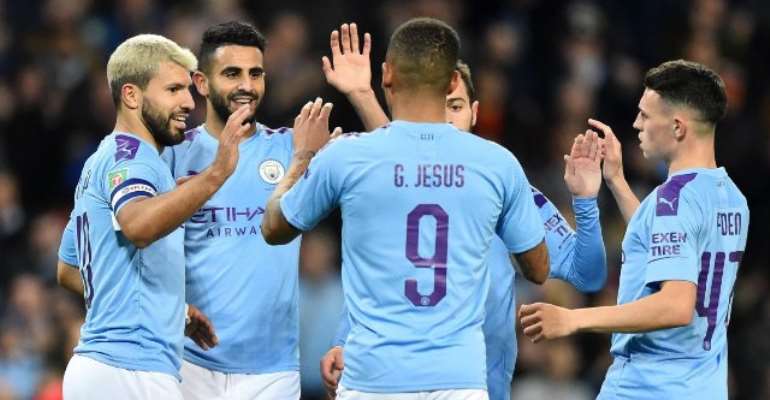 Manchester City strolled into the quarter-finals of the Carabao Cup after a comfortable 3-1 fourth-round victory over Southampton at the Eithad.

On the back of the biggest ever home defeat in the top tier of English football, Southampton headed north very much set up to keep the scoreline respectable against a City team who deployed both Sergio Aguero and Gabriel Jesus up front.

Saints did hold out for 20 minutes until Nicolas Otamendi climbed highest to head City in front, with Aguero doubling City’s lead after a fine, flowing move in the 38th minute.

Aguero’s 12th goal of the season added to City’s total in the 56th minute, with Jack Stephens’ late header bringing some consolation to Saints but City, nonetheless, progress at a canter.

Pep Guardiola did shuffle his pack with youngster Thomas Doyle making his City debut, but had little sympathy for the beleaguered Saints, going with an extra striker.

Saints came with a plan to keep it respectable, and they managed comfortably for 20 minutes until Bernardo Silva clipped the ball in for Otamendi to head home, before Walker’s inch-perfect pass picked out Aguero for City’s second.

The visitors finished the first half having not had a single touch in City’s penalty area, and came out for the second half with the same outlook.

11 minutes into the second it was three, with Aguero reacting fasted after Riyad Mahrez’s strike was deflected into his path.

City had several chances to make it four before Saints made two attacking changes and finally started taking the game to City, deservedly getting themselves back in it after Stephens powered home the header, but they were powerless to stop the holders cruising through.