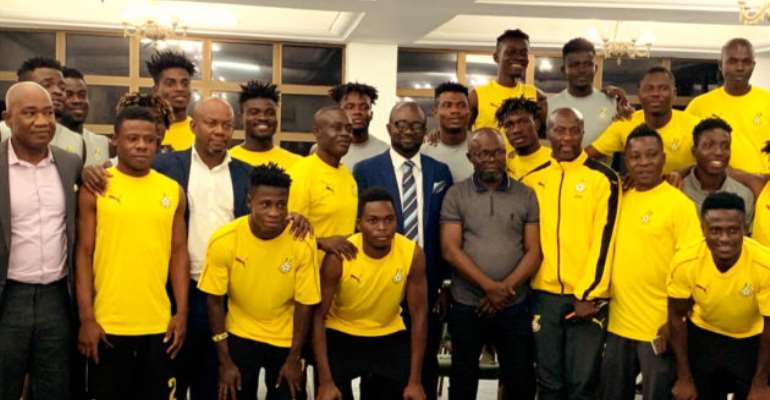 New President of the Ghana Football Association (GFA), Kurt Okraku has tasked the national U-23 team – Black Meteors – to secure the country a return to the Olympics Games after a decade-and-half absence.

Ghana last featured at the Olympic Games in Athens in 2004 and have now come close to another berth, the 2020 edition scheduled for Tokyo.

The Black Meteors are set to participate in a final qualifying tournament – the 2019 U-23 Africa Cup of Nations in Egypt from November 8 to 22 where they are to place among the first three in order to book their ticket to the Olympics.

The GFA President called on the Black Meteors team at their camping base in Accra Monday evening.

Addressing the team, Mr. Okraku assured the Meteors of the unflinching support of the GFA and the football fraternity while admonishing them to be self-motivated for the task ahead.

“You have an opportunity to make history and make a mark for yourself, your family and most importantly your country [Ghana].

“You would soon realize that it is not the monetary motivation that will come from the FA or government that is most important – that many and perhaps bigger opportunities will open for you; that’s what we call the ultimate motivation.

“That once you go on the pitch, it’s you, your crest, your family sitting at home praying for you, brothers and sisters yet-to-be-born because their future depends on how well you do today.”

Break 15-year qualification jinx
“It’s been 15 years since Athens 2004 that we went to the Olympics. 15 years is too long a time, I plead with you, let’s do this together. Let’s all say that even after 15 years, yes we did it.

“We are all blessed. Me, I open doors; God gives me the chance to open doors and in our era, through your hard work a lot of doors will be opened… Let’s all have belief that the impossible is possible,” the GFA President also stated.

Kurt Okraku was accompanied by some members of the newly-formed Executive Council of the GFA. They include; Messrs Mark Addo, Nana Oduro Sarfo, Samuel Anim Addo and Randy Abbey.

Head Coach Ibrahim Tanko, on behalf of the technical team, also thanked the President and his delegation for visiting them.

“Your visit means a lot to us. This is your first official day in office and we are really happy and encouraged that you have remembered us with this visit,” he said.

“We can assure you that we will go to Egypt and fight for the nation. We don’t want to just go and qualify; we want to go there and win the trophy for our country Ghana, in shaa Allah,” added coach Tanko.

Vice-Captain of the side, Kwame Baah also thanked the President and his team and also assured them of the team’s commitment to the task ahead in Egypt.

Ghana, who will be making a maiden outing at the U-23 Afcon, find themselves in Group A with hosts Egypt, Cameroon and Mali.