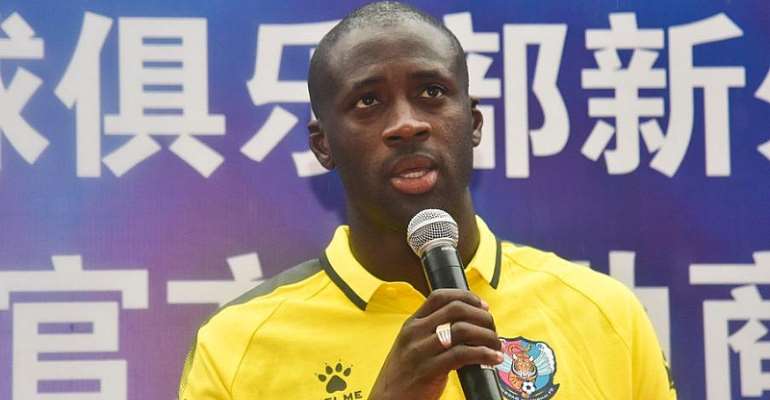 Yaya Toure says Fifa is not doing enough to stamp out racism and that England should have walked off the pitch in the face of monkey chants during their Euro 2020 qualifier in Bulgaria.

The 36-year-old former Barcelona and Manchester City midfielder made the comments to AFP after Qingdao Huanghai clinched promotion to the Chinese Super League at the weekend.

England's 6-0 victory in Sofia earlier this month was marred by racist chants and Nazi salutes from a section of Bulgarian fans.

The game was halted twice during the first half but England players opted to complete the match instead of walking off the pitch.

"This is a shame, why are you playing for England?" Toure, who has been outspoken on football's racism problem, said of the decision.

"They are always talking, 'Blah, blah, blah', and what? Nothing changes."

Turning his real fire on football's decision-makers, the four-time African player of the year said: "People from Fifa don't care anyway because we've been talking about this, but it's still continuing.

Raheem Sterling, the England and Manchester City forward, has been widely praised for playing a prominent role in calling out the racists at home and abroad.

But Toure, his former teammate at City, said that was "not good enough".

"They have to be serious about it, players need to make serious moves about it otherwise they (the racists) will continue to do that," he said.

"They have to get the players out of the field."
Fifa did not immediately reply to an AFP request for comment.

'THEY RESPECT NOBODY'
Toure was speaking after he played a pivotal role for Qingdao in a 2-0 win on Saturday at Shanghai Shenxin, attended by just a few hundred spectators.

Victory ensured promotion to the top-tier Chinese Super League for the team that Toure joined in July, but he is unlikely to make the move up with them next year.

"I think I'll finish in December or January, then go, have another challenge," he said, vowing to play on until he is 40.

"People are thinking that I'm done, but I'm not done yet," he said.

Toure has enjoyed his spell in Chinese football and stressed that he has never experienced any form of discrimination in the country.

"It's been a nice experience because I've seen people with a different mentality from Europe – the way to play football, the way they feel and their behaviour on the field," he said.

"When I play in the stadiums, nobody boos me because I'm black, it's a different culture, they respect.

"In Europe, they respect nobody."