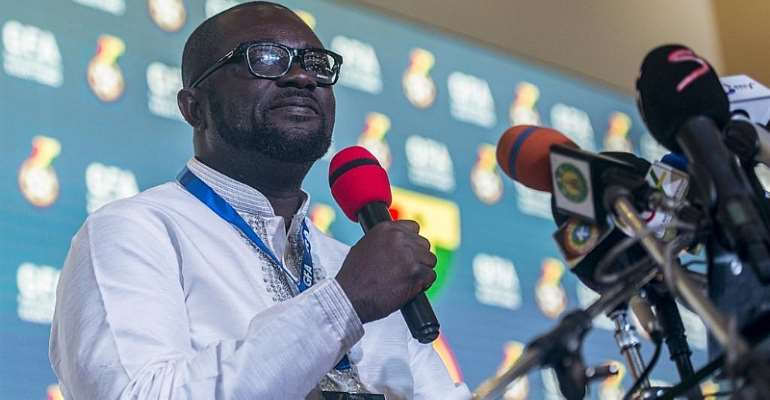 Kurt Edwin Simon Okraku is the new president of the Ghana Football Association after edging a close election in Accra on Friday that required three rounds of voting.

The 48-year-old was endorsed with 93 votes in the third round after his closest challenger, the former Ghana Football Association vice-president George Afriyie, had conceded defeat.

Okraku had won every round against four other candidates before eventually winning the crucial vote to become the 24th president of the Ghana FA.

"I am really humbled for this unique opportunity," Okraku said.

"It is time for us to work, look into the future with hope and build a solid foundation."

Nyantakyi, who had led GFA since 2005, stood down last year and was later handed a life-time ban by FIFA for breaching ethics guidelines.

Okraku will take over the mantle of the running of Ghana Football from a Normalisation Committee put in place by Fifa over the last one year.

He says his top priority is to restore confidence in Ghana football among fans and corporate bodies and develop it into a tool for wealth creation.

However, a new Executive Council Members were also elected on Thursday at the Secretariat of the Ghana Football Association in Accra.

The newly constituted Executive Council comprises of five representatives from the Premier League, three from the Division One, with the Regional Association with two members and one member for Women's Football.

A slot has been automatically reserved for the elected Ghana Football Association President.

Trio Randy Abbey, Samuel Anim Addo and the owner of Nzema Kotoko Mark Addo grabbed themselves the three slots for the Division One League.

Eastern Regional Football Association chairman Linsford Asamoah managed to win one of two slots with Mr. Salifu Zida and Robert Duncan to battle out for the remaining slot to serve on the council.

Okraku served on the executive committee of the Ghana Football Association under Kwesi Nyantakyi and was previously Communications and Marketing Manager of Accra Hearts of Oak after graduating from the University of Liverpool with an MBA in football administration.

However, he has confirmed his resignation from Dreams FC as the Executive Chairman of the club.