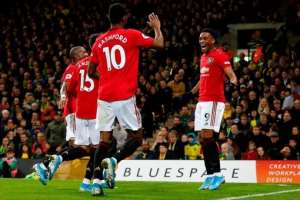 Manchester United beat Norwich City 3-1 at Carrow Road on Sunday despite missing two penalties to claim their first Premier League away win of the season and move up to seventh in the table.

Goals by Scott McTominay and Marcus Rashford put United in control by halftime but they could have been out of sight had Tim Krul not saved spot-kicks from Rashford and Anthony Martial -- both penalties awarded after VAR interventions.

McTominay swept the visitors in front on 21 minutes, United's 2,000th Premier League goal, and after Rashford was denied by Krul from the spot the striker made no mistake when he was played in by Daniel James after 30 minutes.

Krul dived to his left to save Martial's spot-kick but the French forward atoned with a neat finish after 73 minutes following a slick interchange with Rashford.