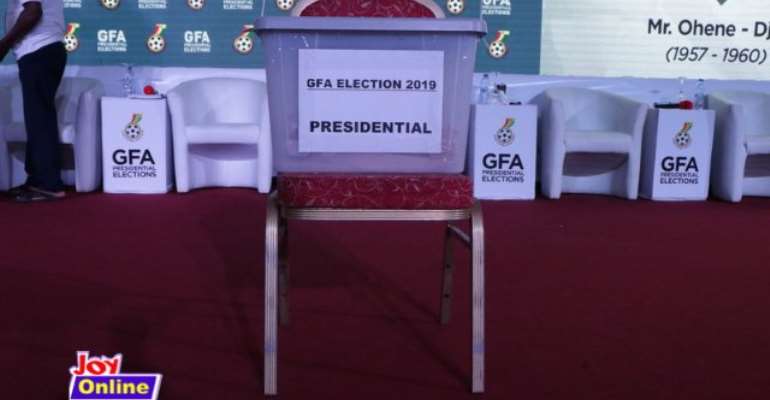 On September 20, nominations were closed for the GFA elections. From then, until the results were declared, the process has been winding, intriguing and tasking for everyone involved – even the general public whose only job has been to observe and pass comment.

Along the way, a lot has played out. But, like a skirt, what was revealed is important, but what was hidden is vital.

Joy Sports Gary Al-Smith - who covered the manifesto launches of all the presidential candidates, some of the regional aspirants' campaigns, and the (sometimes moribund) workings of the system - has sampled some niggling questions from the watching populace, of social media.

1. Was Wilfred Osei Kwaku 'Palmer' really targeted by the Normalisation Committee for removal from the polls? (Senita Akannie, Twitter)

It depends on who you ask. From the onset, Team Palmer’s campaign strategist, Ebo Appiah, has told anyone willing to listen that this is the case. “They wanted Palmer out of this race from day one,” he told Joy Sports three weeks ago.

And yet, the NC have insisted that they’ve only followed due process to look into Palmer’s dealings in a controversial player transfer where he is accused of failing to make a statutory 10% payment.

Palmer fought hard through legal channels but ultimately could not get himself on the ballot paper on Friday.

2. Was there really a recording of Normalisation Committee boss, Dr. Kofi Amoah, saying he would make sure Palmer will not take part in the polls? (Bali Yevu, Twitter)

A recording exists, yes. Actually, two versions.
One version is the voice of Dr Amoah discussing the merits of the Palmer case, where he suggests that it would be difficult for the former GFA ExCo member to win. This version is edited to portray Dr Amoah as making a definite promise that Palmer will never have a chance at running for GFA president.

The second version has voices of Dr Amoah and others in an unedited tape. This longer version provides more context about what was an informal discussion that was recorded by someone present at the gathering. Here, it is clear that Dr Amoah is giving his opinion on the merits and demerits of the Palmer case, and then concludes that it may be hard for Palmer to win that legal battle.

Depending on which version you heard, your conclusion could, obviously, be coloured. But clearly, the edited copy was done with mischief in mind…

3. How much did each delegate receive? (Gavor Charles, Facebook)

It's alleged that Kurt Okraku paid £4,000 to each delegate, George Afriyie paid GHS 5,000 to each of the 118 delegates. I want to know how true it is. (Sulemana Abdul-kahad, Facebook)

Was one of the contestants willing to pay $100,000 to the other so that he will step down? (Madi Ibrahim, Facebook)

I want to know if it was really true that there was some vote-buying at the Congress. (Yussif A Abdul Razak, Facebook)

It will be foolhardy to assume that it did not happen, for the sources of such rumours were sometimes very credible. However, there is tendency to exaggerate the amounts involved. It is also not just about the money for votes, but the other deals which involved long-term promises of positions and power. In short, just as the world has known political gimmickry to exist for ages, it was not absent at these elections.

4. Why was Nana Yaw Amponsah not knocked out in the second round to leave Kurt Okraku and George Afriyie to go for the run-off? (Gershon Boakye, Facebook)

Election run-offs in Ghana are traditionally left for the top two candidates to contest. The GFA elections were different: the rules said that only the bottom-placed candidates would not make it into the next round – this case Amanda Clinton and George Ankomah Mensah (both polled zero votes). This left four candidates to qualify for the run-off – Kurt Okraku (44 votes), George Afriyie (40), Nana Yaw Amponsah (27) and Fred Pappoe (six). Of course, Pappoe pulled out at this point, leaving only Okraku, Afriyie and Amponsah to slug it out.

5. Would Nana Yaw Amponsah have said he's giving his votes either to Kurt Okraku or George Afriyie without going for a second round? (Ampong Abraham Danquah, Facebook)

Yes, he could have. But, he opted not to. This is what happened: After the first round was done, it was obvious that either of Kurt or George needed a push from somewhere to cross the 50% mark required for an outright victory.

The obvious kingmaker, now, was Amponsah, and he was seen moving around, hoping to strike a deal with either party. Whatever discussions subsequently took place evidently did not yield result, because Amponsah went solo in the second round.

6. What happens to the runner up in the presidential election? Is it a winner takes all? (Opoku Boateng Khorblah, Facebook)

The new FA rules say that a Vice President shall be elected from the Executive Council at their first meeting following the polls. It is not by appointment.

7. I really want to know whether Kwesi Nyantakyi had an influence over the election. (Asante Bismark, Facebook)

Was Nyantakyi present there [at the Congress grounds]? (Afora Mohammed, Twitter)

Even before the elections, his shadow loomed large over the process, with many reports suggesting that NC members, delegates, candidates and anyone you could think of were seeking his opinion.

It will be naïve to suggest he had no influence on the campaign because his power – gained over 13 years as President – will not have diminished in just 16 months out of office. His lifetime ban from Fifa bars him from football activity; it doesn’t stop him from speaking to fellow human beings.

Was he at the Congress grounds on Friday? I did not see him, as the Joy Sports crew was on air almost the whole time. But many of our media colleagues say he was in the area. Many credible colleagues even suggested that one of the candidates went to see the former FA boss after the first round of votes. These reports cannot be independently verified.

8. Palmer's disqualification: how did it favour Kurt as most of the media in Kumasi are saying? (@mrzacq, Twitter)

I am not sure what their theories are, but what is certain is that if Palmer had been on that ballot paper, he would have polled a significant number of votes. Where his votes went? There are several theories.

One is that on Thursday evening, Kurt’s team held a crunch meeting with a powerful name in Ghana football. There, it was agreed that should Palmer not get his request for an injunction on the elections from CAS (which he did not), the votes going to Palmer should go to Kurt. That’s one theory.

Another theory is that the delegates scheduled to vote for Palmer would rather not do so for George Afriyie, but had to choose between Kurt and Amponsah. The theory suggests that some opted for Kurt. Others went for Amponsah, which explains his shock 27 votes in the first round. The second round is where the crucial switch came, because with a choice to vote for Kurt, George, and Nana Yaw, the Palmer votes overwhelmingly went to Kurt, who improved his first-round 44 votes to an unassailable 59.

All these are theories, of course. The bottom line is that Kurt ran a slick campaign, good enough to gain the trust of the delegates.

9. What caused the downfall of George Afriyie? (Vincent Humble, Facebook)

There is a sense that the former GFA Veep lost the election when it was his to win. In particular, his recent utterances leading to the election may have really put delegates off. He was so confident of a victory that he predicted, more than once, a landslide win.

Another factor may have been his choice to decline an invitation to be part of the historic presidential debate last Monday. Did he really need to be on a business trip to Turkey to broker pitch deals on behalf of the FA when he was not yet the FA boss? Could he not have rescheduled this trip? We will never know.

Whatever the reasons for his loss, it is certain, from interactions with delegates, that he was a heavy favourite to win only a few weeks ago. That said, Afriyie may have lost this battle, but he remains an influential person in the game. He will learn from his errors, and if he stands again in 2023, it’s all to play for.

10. Why did George Afriyie concede? Couldn’t he have lobbied before the third round and beaten Kurt? (Amanda Boakye, Facebook)

I’ll leave this to be answered by Alhaji Karim Grusah, who gave some insight to Kumasi-based Akoma FM on Saturday. Speaking in Akan, the King Faisal owner said: “I facilitated the concession of George Afriyie. I appealed to Dr. Kofi Amoah to give me a few minutes to carry out a task before the third round of the elections. After that, Randy Abbey and myself made a passionate appeal to George to concede, in the interest of Ghana football. I'm happy that George listened to me, and accorded me the respect as a father and conceded.”

11. What’s the fate of the NC now that a new GFA has been birthed? (Abdul Mateen, Facebook)

The mandate from Fifa was to end their tenure when new statutes are put in place and an election is conducted to usher in a new President. Now that’s done, Dr Kofi Amoah and his team will begin procedures to end their time in power. They’ve worked for 13 months, since September 13, 2018.