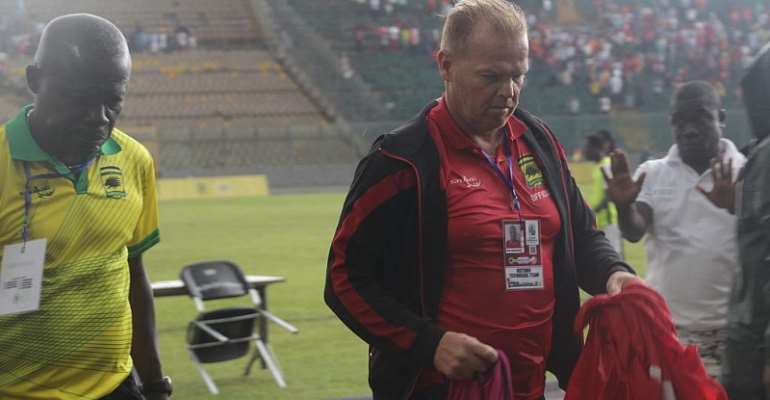 Kumasi Asante Kotoko’s CAF Confederation Cup last round qualifier against Ivorians FC San Pedro has been called off after downpour rendered the pitch waterlogged and unplayable.

The game was level at 0-0 after the first 45 minutes. But when the players re-emerged for the second half, the rains, which had been falling from the start of the game, had rendered parts of the Baba Yara Stadium pitched soggy, forcing officials to call off the game.

Game will continue on Monday from minute 45 as per the Confederation of African Football competition rules with the score at 0-0.

Players had initially come out for the start of the second half before they were recalled into the dressing to wait out the incessant rains.

But after 15 minutes, the South African officials, led by centre referee, Eugine Nkosinathi Mdlule, came out and kicked the ball around, presumably to check the mobility of the ball in the conditions.

One goalpost was particularly in worse condition than the rest, and there was a suggestion to drain the water for the game to continue.

San Pedro players brought out ice coolers to help with the draining, Kotoko officials and players were seemingly unimpressed with the gesture, protested and a scuffle ensued, forcing security men onto the pitch to calm tempers.

The referee subsequently called off the game.