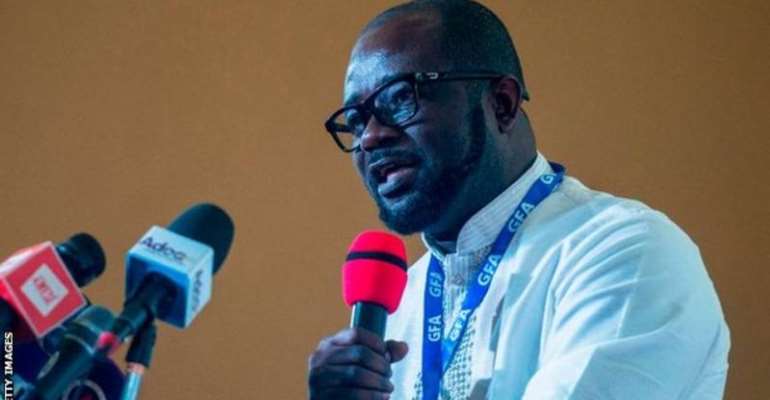 New Ghana Football Association president Kurt Okraku says he will get to work immediately after he was sworn in for a four-year term on Friday.

Okraku won a close election to become the Ghana FA's 24th president and was straight into meetings with visiting Fifa officials and the Normalisation Committee that has been running football in Ghana for the past year.

He has been given the mandate to lead Ghana football at a sensitive time after allegations of corruption, which were broadcast in a documentary, almost brought the sport it to its knees.

Okraku, a former executive committee member in the GFA at the time of the investigation by the journalist Anas Amereyaw Anas, maintained throughout his campaign that "our sport has sunk into oblivion following the airing of Number 12."

The 48-year-old former sports journalist says "Ghana football faces its biggest challenge but it also presents us with an opportunity to change things and embrace all the right principles of corporate governance."

Okraku says he would be fixing this "biggest challenge" by rebuilding trust and restoring the image and reputation of the GFA, enhancing the infrastructural base of clubs - and at juvenile level - and employing the best management practices possible in running the football association.

"We have an opportunity to build a new association with a clear business plan detailing excellence in management, accomplished marketing and sales team to churn out great football products and event experience supported by good communication with top notch financial and internal audit and compliance assurances," Okraku said in his manifesto document.

There is a clear sense that restoring public trust in the Ghana Football Association would be his biggest responsibility at least in the first year of his tenure.

"The image of the federation is battered so we must work on making it better as soon as possible," Fred Acheampong, one of the eleven members of the new Executive Council of the GFA told BBC Sport.

"If he is transparent then it helps a great deal. Often we have felt at the federation that we are accountable to only our members but we go to the corporate world to seek sponsorship, we ask Ghanaians to patronize our products and the only way they can have faith and trust in us is if we are open and transparent with them."

Both Daara and Acheampong, who is also Chief Executive of top flight side Ashanti Gold, want regular club football after a four month lull but beyond that both are keen for the club scene to become better.

"A big priority should be to get the league started so that we can play football at all levels again," Acheampong said.

"We need significant sponsorship so that clubs can breath easy now. I am involved with clubs and many are struggling to hold onto players.

"If we make it attractive I don't think our players would be running to places like Tanzania, Guinea, Congo and others. Once we improve the local game, the ripple effects on the game would be massive," Acheampong added.

Those are long-term objectives. Immediately, the return of the league and fixing the various under-performing national teams would feature highly on Okraku's agenda.

The future of Black Stars coach Kwesi Appiah is still a subject that deeply divides the Ghanaian football public and the country's various national teams have struggled at international level.

It could prove a long four years for the Dreams FC owner and University of Liverpool product but he says he is up for it.