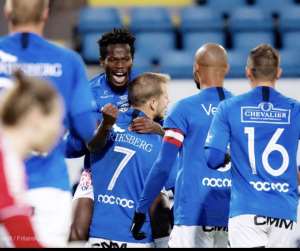 Ghanaian international, Abdul Fatawu Safiu scored a sensational goal on Saturday afternoon when his Trelleborgs FF side lost 2-1 to J Sodra in the Swedish Superettan League.

The two Swedish top-flight clubs locked horns on match week 28 of the ongoing 2019/2020 season in search of crucial 3 points to improve their respective positions on the league standings.

At the end of a pulsating encounter at the Vangavallen Stadium, it was the away side that run away with the maximum points.

J Sodra took a deserved lead just two minutes into the first half when Jakob Orlov fired home a good short from inside the opponent’s 18-yard box.

Trelleborgs showed resilience and recovered from the early goal to restore parity on the 29th minute. Former Kotoko striker, Fatawu Safiu completed a quick counter-attacking play with a beautifully chipped shot into the back of the net.

Though the home side took the lead on the 36th minute through Sebastien Ohlsson, two goals from Edin Hamidovic and Alexander Jallow in the second half turned the tide and handed J Sodra a 3-2 win at the end of the 90 minutes.

Abdul Fatawu Safiu lasted the entire duration of the match even though his third goal of the season could not guarantee Trelleborgs FF any point.

Watch the forward’s goal in the video below.