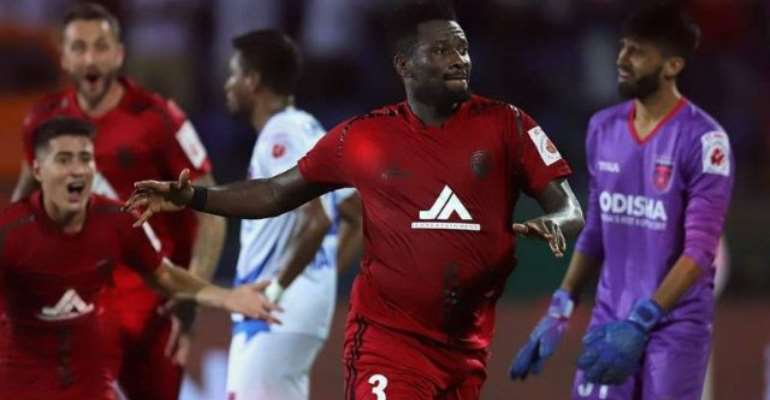 Ghana international Asamoah Gyan opened his scoring account in the Indian Super League as NorthEast United beat Odisha to register their first win of the season on Saturday.

The striker's 85th-minute goal proved crucial as it handed his outfit a 2-1 home triumph at Indira Gandhi Athletic Stadium.

A matchday two fixture, the game offered United three points for the first time in this campaign following a 0-0 away draw with Bengaluru.

Redeem Tlang opened the scoring for the hosts in just the second minute but Xisco Hernandez scored in the 71st minute to level the score for Odisha.

Five minutes to full-time, Gyan, who received a yellow card for a foul on the stroke of half-time, netted to ensure a win for United, having been set up by Lalthathanga Khawlhring.

The Highlanders have moved top of the table, a status that could change with matchday one winners Goa, Jamshedpur and Mumbai City yet to be in action in week two.

Gyan moved to the Indian side last month, having spent last season with Turkish outfit Kayserispor.

Covid-19 Lockdown: Jubilee House Empty As Workers Told To Wo...
37 minutes ago

Lockdown: ‘Stop Choking Market To Stock Up Food, We’re Not ...
39 minutes ago