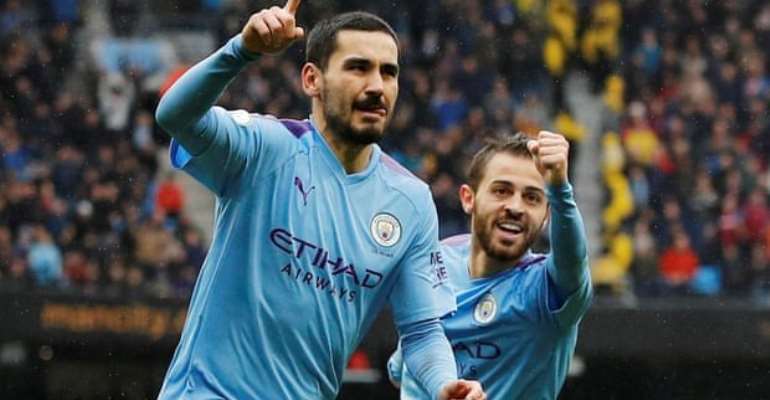 Three second-half goals ensured Manchester City climbed back into second in the Premier League after a 3-0 victory over Aston Villa at the Etihad Stadium on Saturday.

City struggled to get going in the first half, with Villa having several chances to break the deadlock in the pouring Manchester rain.

However, City wasted no time after regrouping at the interval, as Raheem Sterling latched onto a Gabriel Jesus flick before firing City in front just 20 seconds into the second half with his 13th goal of the season.

Jesus then almost grabbed a quick-fire second, but Tyrone Mings cleared off the line before Kevin De Bruyne did find the net in the 65th minute after his cross eluded everyone and arrowed into the bottom corner.

Five minutes later Ilkay Gundogan made sure of another three points for City after he reacted first to a blocked shot to scissor kick his strike into the net.

The result sees City climb back above Leicester City -- after their record-equalling 9-0 victory at Southampton on Friday night -- and into second, but the win was tarnished by a late red card for Fernandinho.