UCL: Tottenham Return To Form With Thrashing Of Red Star 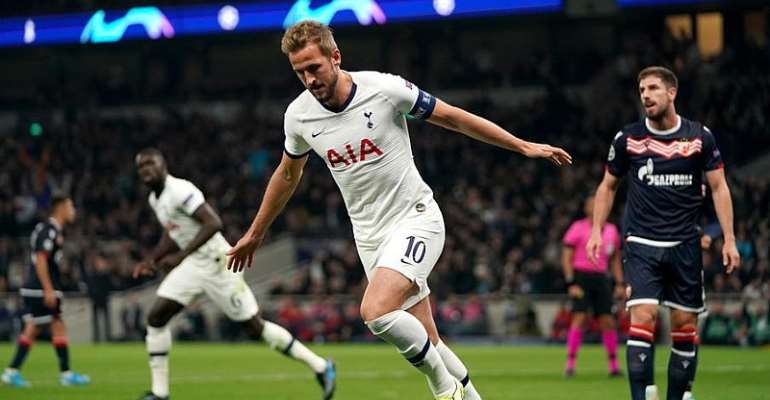 Son Heung-min and Harry Kane combined to put Tottenham's troubles at ease by both scoring twice in a 5-0 win over Red Star Belgrade to put their Champions League campaign back on track on Tuesday.

Last season's finalists were thrashed 7-2 at home by Bayern Munich in their previous European outing and have won just two of their last eight games in the Premier League.

They moved back into pole position for a place in the last 16 by blowing away the Serbian champions.

Kane's near post header opened the scoring before a Son double put the outcome beyond doubt before halftime.

Erik Lamela smashed home a fourth and Kane rounded off the scoring 18 minutes from time on a night when Tottenham clicked back into gear.

Son was restored to the starting line-up after being left on the bench for Spurs' latest disappointing display a 1-1 home draw against bottom-of-the-table Watford.

The South Korean had been rested just days after returning from a tense World Cup qualifier in North Korea. He has been a shining light among a dramatic dip in form from many of his teammates this season and got his reward on a night Mauricio Pochettino will hope proves to be a turning point.

Kane has continued to score goals and is now up to 15 for club and country this season.

The England captain opened the floodgates when he met Lamela's in-swinging corner on nine minutes.

Spurs also took an early lead against Bayern in a bright opening half hour before a second half collapse against the German giants.

But there was never any danger of a repeat against far more limited opponents, especially after Son deservedly doubled the hosts' lead.

Lamela was again the creator with a teasing cross for Son to meet sweetly on the half-volley.

Pochettino admitted on the eve of the game that speculation over his future was normal, despite the success he has achieved in turning Tottenham from Europa League regulars to Champions League contenders over the past five years.

However, the Argentine was serenaded by a home support soothed by the sight of Spurs returning to form, for 90 minutes at least.

A much tougher task awaits on Sunday when Spurs travel to Liverpool in a repeat of last season's Champions League final with revenge on their minds.

But another adventure into the knockout stages of the Champions League at least now looks probable for Pochettino's men, as they moved a point ahead of Red Star into second place in Group B behind Bayern.

After a brief spell of resistence from the visitors, Son made sure the three points were safe before the break by finishing off a swift counter-attack from Tanguy Ndombele's pass.

Spurs should have had far more than two more after the break. Lamela could have had a 15-minute hat-trick as he missed two glorious chances either side of a thumping left-foot finish from Serge Aurier's pass.

Son was then withdrawn to keep him fresh for the trip to Anfield, but the chances continued to flow and Kane rounded off the scoring when his side-foot finish nestled in the far corner.