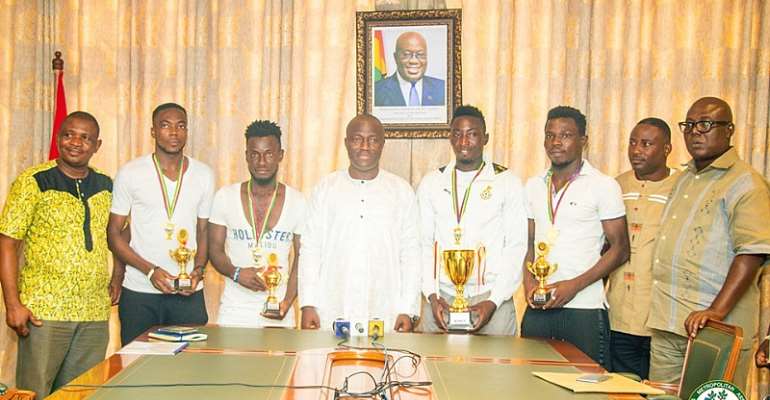 The Mayor of Accra Hon. Mohammed Adjei Sowah has urged his fellow MMDCEs along the coast to support Beach Soccer to generate employment and reduce crime rate among the youth at the coastal areas.

The mayor said this when Beach Sports Consult, the organizers of the Homowo 2019 Beach Soccer Competition together with Teshie United, winners of the championship called on him at the Accra City Hall to officially present trophies won during the competition.

“I commend all the participating teams for all the effort they have put in the tournament to make it a success and I will like to also call on my colleagues who are Chief Executives whose area of jurisdiction extend to the coastal areas to get interested and support the teams within their localities so that Beach Soccer will become part of the assemblies’ sports arrangement,” he said.

Mayor Sowah added that more effort should be put in beach soccer because it would also help in the development of this country, thus urged the Ledzokuku Municipal Assembly and other municipal assemblies to own teams as he would also focus on James town and Chorkor.

The Organizing Secretary of Beach Sports Consult, Mr Ernest Sackey Narh who spoke on behalf of Beach Sport Consult expressed their gratitude to Mayor Sowah for his immense support, advice and encouragement given to the team throughout the event and also used the platform to relay their purpose for the meeting.

He said, “The organizers and winners of this event express their appreciation to you for your support and the pieces of advice, for the encouragement you gave us while we struggled to put up the event. Indeed the success of the program is what has made us call on you so we share that success with you while we present to you the post-event report to abreast you of what transpired while you were away on national assignment”.

Mr Sackey also said that their mission was also to collaborate with the assembly in the area of encouraging the promotion of beach sports within the communities while focusing on marine and oceans protection.

“Our focus is on cleaning up the beaches which is one of your concerns so we are trying our apron to yours by calling on you so together we work to make sure coastal dwelling becomes a theme that will benefit us all” he added.

The 2019 Homowo Beach Soccer which was an invitational tournament for Accra coastal towns was held at the Laboma beach resort from fifth to sixth October 2019 among six qualified teams from Tema, Ada, La, Osu, Dansoman and Teshie in Accra.