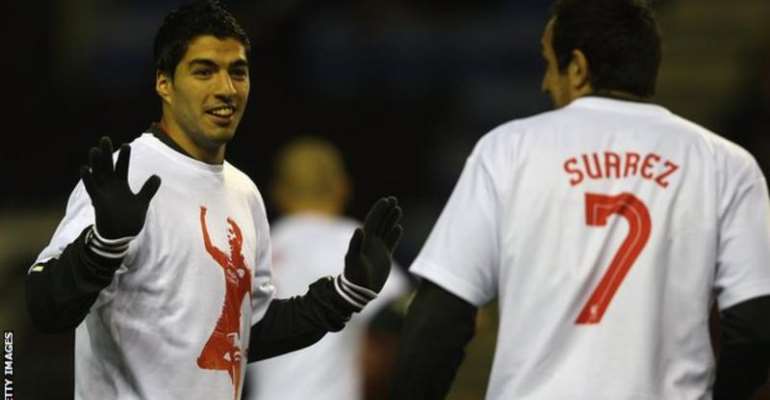 Ex-Liverpool defender Jamie Carragher has apologised to Patrice Evra for wearing T-shirts in support of Luis Suarez after the Uruguayan racially abused the Frenchman in 2011.

After a two-month investigation, Suarez was given an eight-game ban by the Football Association on 21 December.

A day later, Liverpool wore 'Suarez 7' T-shirts in the warm-up before their Premier League game against Wigan.

Carragher said the club "got it massively wrong".
The former England defender was working in his role as pundit on Sky Sports on Monday alongside ex-Manchester United full-back Evra.

Carragher said: "There is no doubt we made a massive mistake; that was obvious. We got to the ground, had our lunch and then had a team meeting - I don't know if it was the manager [Kenny Dalglish] or [coach] Steve Clarke - asking one of the players if he was still wearing the shirt, and that is the first I had heard of it.

"I am not lying and saying I wasn't part of it because as the club we got it wrong, and I was vice-captain. I am not sure who was actually behind it. I don't think it had anything to do with the manager Kenny; I think it was the players who were close to Luis in the dressing room, who really wanted to support their mate.

"Maybe I have to look at myself now and say I did not have the courage as an individual to say 'I am not wearing it'. I don't think everyone within Liverpool Football Club thought what we were doing was right but I do think as a football club, or you as a family, your first reaction is to support them even if you know that they are wrong, and that is wrong.

"I am not condoning it, but that is the first reaction. Apologies. We got it massively wrong."

Evra added: "When I saw it I was like, this is ridiculous. This is unbelievable. You put your own club in danger when you do those things. You always have to support your player because he is from your team but this was after the ban. If it was before and we were waiting for the sanction, I would understand.

"What message do you send to the world? Supporting someone being banned because he used some racist words."

What happened between Suarez and Evra?
In November 2011, Suarez was charged by the Football Association with racially abusing Evra in a 1-1 draw between Liverpool and Manchester United at Anfield one month earlier.

On 20 December, Suarez was banned for eight games following a six-day hearing, during which Suarez was accused of using "insulting words", which included reference to the colour of Evra's skin. The ban was suspended pending an appeal. One day later, Suarez started in a 0-0 draw against Wigan, a game in which he and his team-mates wore T-shirts with Suarez's name and picture on during the warm-up, in a display of support for the Uruguayan.

Liverpool backed the player in the dispute, saying: "We find it extraordinary that Luis can be found guilty on the word of Patrice Evra alone.

"No-one else on the field of play - including Evra's own Manchester United team-mates and all the match officials - heard the alleged conversation between the two players in a crowded Kop goalmouth."

Suarez told media in Uruguay that he "called [Evra] something his team-mates at Manchester call him".

Evra made his claims immediately after the match and was quoted as telling French television station Canal Plus: "There are cameras, you can see [Suarez] say a certain word to me at least 10 times."

The Football Association's report into the incident, released at the end of December 2011, stated that, after being tackled by the Uruguayan, Evra asked Suarez why he had kicked him, to which the forward replied in Spanish: "Because you are black."

When Evra challenged him to repeat the answer and said he would "punch him", Suarez said: "I don't speak to blacks."

Suarez is said to have used the term "negro" seven times in around two minutes.

On 3 January 2012, Liverpool decided not to appeal against the verdict, but the club maintained Suarez was innocent.