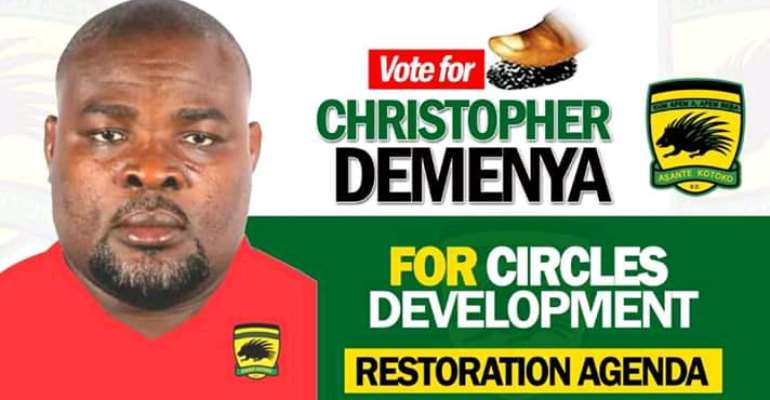 Damenya, who in his manifesto stated he will ensure the Circles membership both in the Greater Accra, Ashanti and the Brong Ahafo Region is increased by 50% in his first year in office, has chronicled the key areas he intends to work on massively to make the club’s Circles a highly recognized office.

According to him, the 12 achievable milestone will be spread during his four-year term in office.

Read below his 21 achievable milestone of his RestorationAgenda manifesto;

YEAR ONE
MILESTONE 1
In my first year as an Executive Chairman, I will concentrate on the Human Resource Development of the National Council. Human Resource is the most important resource in every human endeavour.

manpower and working capabilities.
MILESTONE 2
Since Communication is a very important tool in modern-day business management, this area will be given the needed attention. In order to foster a good working relationship among the Circles, all Circles will be impressed upon to create facebook accounts, twitter handles and an electronic mail (e-mail) addresses and Whatsapp Platforms to make communication an essential tool for our day-to-day activities.

MILESTONE 3
It is a fact that if not well resourced, persons working for the club will not have any appreciable or good working environment; it will be very difficult to get the best out of them. I am, therefore, going to ensure that by any legitimate means possible we acquire or get ten (10) regional offices for the club’s circle activities.

Sale of Paraphernalia:
In order to help generate funds for the club, sales of club paraphernalia will be given serious attention in conjunction with management. Supporters will be encouraged to patronize the products from these recognized offices so that we can halt those vendors who sell club paraphernalia without the club benefiting anything from such sales.

Also in consultation with management, a task force would be put in place to flash out all vendors who sell the club paraphernalia bearing its registered logo and colours.

MILESTONE 4
The National Circles Council Membership Drive will be a multi-purpose ID card which will be revitalized for every true Asante Kotoko Supporter to be identified and made to contribute his or her quota towards the development of the club.

Sale of Paraphernalia:
In order to help generate funds for the club, sales of club paraphernalia will be given serious attention in conjunction with management. Supporters will be encouraged to patronize the products from these recognized offices so that we can halt those vendors who sell club paraphernalia without the club benefiting anything from such sales.

Also in consultation with management, a task force would be put in place to flash out all vendors who sell the club paraphernalia bearing its registered logo and colours.

MILESTONE 5
When given the mandate, I would map-out visiting strategies once every quarter to reach out to all Regional Circles Councils. This opportunity will draw me closer to the various circles to motivate, and encourage them about the Club in terms of support and contribution that will enable the rapid growth of the Club.

YEAR TWO
MILESTONE 6
When given the nod, in collaboration with the various Regional Council Leadership, the National will provide Kotoko Branded Exercise Books, Pen, Pencils and other visibility materials to some Basic Schools within the catchment areas of the Regional Councils.

MILESTONE 7:
I will ensure that fundraising dinner is organized at the national level annually to raise funds for the club and circles. This will be extended to the Regional levels as well and a very big percentage of the proceeds will go to management to help them manage the club very well.

MILESTONE 8
In order to raise funds, I will make sure we take full advantage of all cups won to raise funds for the club. By so doing, anytime Kotoko win’s a cup, a victory float with the cup will be organized by the region to solicit for funds to assist the club and the circles. This would be done with the permission and collaboration of management.

MILESTONE 9:
I would also assist all the Regional Councils by constructing boreholes for them. This will be commercialized to generate revenue as well as to serve as a source of income for all the Regional Circles Council activities.

MILESTONE 10:
A highly spirited cheer song will be composed to be our national cheer song to be sung during matches. This would be done in consultation with some top musicians or jama groups and then the best would be selected. (a very simple but highly spirited song that can be sung by all supporters).

Also, all Regional Councils will be persuaded to get BrassBands to provide massive musical support to the team whenever they visit that particular region to honour matches and in-home matches as well

MILESTONE 11:
During my tenure of office, I would ensure that the NCC pays for the recruitment of at least two players recommended by the management and the technical team annually for our dear club. This will serve as part of the supporters’ contribution to management.

MILESTONE 12
I will work together with you in order to raise the morale of supporters very high and draw them to the stadium during our home matches. The target would be to get at least a minimum of 20,000 fans to the Baba Yara Stadium during home matches.

YEAR THREE
MILESTONE 13
It will be my priority to revive the Otumfuo Special Initiative which is a very good venture but due to one or two reasons, it failed to live up to its potential. I will pursue this project vigorously in a different direction to give it the necessary attention it deserves so as to realize its full potential.

MILESTONE 14
In order to achieve effective communication, a radio programme named “fabulous hour” would be introduced in all the Regional Councils with a particular radio station based in the regional capital to sell out the club and to serve as a marketing tool to raise revenue for the council, its supporters and admirers as well as the business world.

MILESTONE 15
When given the nod by the grace of God, I would ensure that members of AKOPA are called upon to motivate players anytime we have a match. This is to ensure that all players are geared up and filled with the Kotoko spirit. I would also see to it that the NCC also visits AKOPA members to encourage and motivate them.

MILESTONE 16
In order to facilitate a harmonious relationship within the circle’s, annual fun games among the Regional Circles will also be organized every season to bring us together as one family. Venue for the fun games would be on a rotational basis.

YEAR FOUR
MILESTONE 17
When given the nod with a consultation with the National Circles Council and National Congress, I will propose that we take a critical look at our constitution and make some amendments to enable us to meet modern-day trends of management.

MILESTONE 18
It will also be part of my legacy or policy that before I leave office, the circles should have a quarterly National Circles Magazine which will also be published by Kotoko Express. This quarterly magazine will carry only issues and activities relating to the Circles and Kotoko supporters nationwide and worldwide.

MILESTONE 19
I am going to make sure that the number of supporters and Circles will increase. I am going to work with the various circles. Some new circles would be formed after supporters around those areas have been mobilized for them to meet the requirements as per the constitution.

Contacts will be made outside the country to help them to also form circles and help in their own small ways for the development of the club. I would ensure that the Baba Yara stadium stands is categorized whereby supporters from the various regional council would occupy a categorized stand, after which an annual assessment would be done to

know the Regional Council that patronizes our matches and contributes greatly to the success of the team.

MILESTONE 20:
When given the mantle as the National Executive Chairman, it will also be my plan to provide employment opportunities for some Circle Members who are unemployed. This I hope to do through negotiations with Enterprises, CEOs, and Business Executives to give quota to the National Circles Council members who have the qualifications and skills.

MILESTONE 21:
It is my biggest dream that by the end of my tenure, the National Council in partnership with Car Dealers and some Financial Institutions will acquire a bus for the transportation of supporters to and from every single match played nationwide. It will also be commercialized to generate income for the various regional bodies and to facilitate their

activities.
Notwithstanding the above initiative, revenue mobilized from the Borehole sales would also be used to organize buses in the various Regions for transporting Kotoko circle members and supporters to the various stadia where matches would be played.