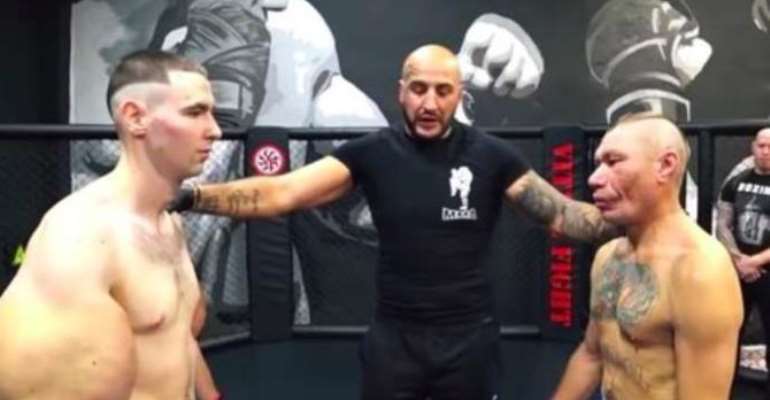 Kirill Tereshin, a name not exactly synonymous with fighting fans across the world.

So allow us to explain the background of the 23-year-old more commonly known by his nickname, 'Popeye'.

Doctors have told him he runs the risk of losing his arms in the future, but that hasn't stopped him partaking in MMA fights.

Sadly for the man with probably the biggest arms in the world, fighting just isn't his game.

Tereshin fought blogger Oleg Mongol at a gym in Abakan in Russian and he was forced to tap out within three minutes.

Those big oil-filled arms are more of a hindrance than anything else.

Tereshin is on the hunt to find a specialist to try and fix his arms, saying back in August: "I used to go to the gym for two years before being called up for military service. In the army, I was worried that I would have a hard time and lose weight so I decided to try synthol oil.

"When I finished military service, I began to transform myself and did everything at home. My mum was very worried about what I was doing, but we are okay now that she knows synthol can be removed.

"In the beginning, I wanted to inject synthol oil into other parts of my body, but then the problems started and I stopped using it."

He is aware of the catastrophic state of his limbs, adding: "At the moment, my arms are in a bad state and are reddening.

"I have launched a fundraiser to see a doctor in Europe for treatment that costs around 3 million RUB (£37,760).

"I would love to go the UK for it, but the most important thing is that the treatment is successful."