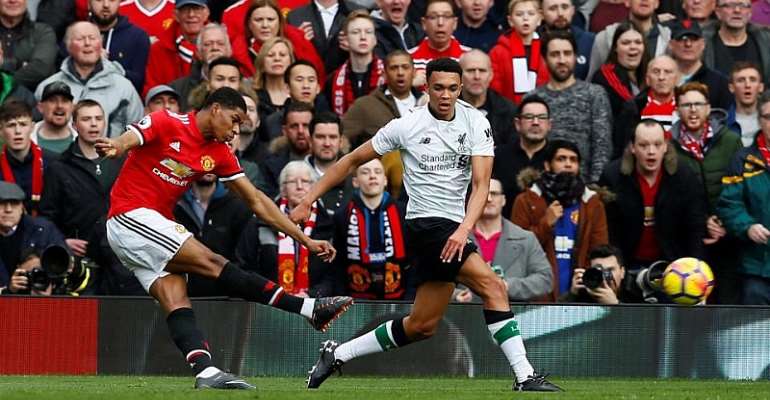 MAN UNITED END LIVERPOOL'S WINNING RUN
Liverpool boss Jurgen Klopp has beaten Manchester United only twice in his career and never at Old Trafford – his worst record against any Premier League side.

A tepid Liverpool considered themselves lucky to come away with a point after Adam Lallana scored a late equaliser – his first league goal since May 2017 – to end their winning streak at 17 games and failing to match Man City's record run of 18.

"It was always going to happen at some point," Klopp said. "Now we can stop talking about that and start a new series."

But that it happened against a vulnerable United team that was sitting one point above the relegation zone before kickoff raised questions while forward Mohamed Salah's absence led to a rejigged front line that was toothless.

United, meanwhile, have squandered eight points from winning positions this season – more than any other team. They have picked up only 18 points since the Norwegian was appointed on a permanent basis in March.

VAR'S INTERVENTION ON PENALTIES UNDER SCRUTINY

Winless Watford were left fuming after key decisions referred to VAR (Video Assistant Referee) went against them in a 1-1 draw at Tottenham Hotspur.

Gerard Deulofeu was felled by Jan Vertonghen in the box and VAR ruled in Spurs' favour while Harry Kane appeared to push defender Christian Kabasele in the build-up to Dele Alli's late equaliser.

"I was thinking VAR is something objective but I'm starting to think it's very subjective," Watford coach Quique Sanchez Flores said.

The elite referees body (PGMOL) said last month that there were four errors made by VAR this season and the notion is that the system is not correcting the referee's original decision.

It has begged the question of why the referee does not look at a pitchside monitor himself as they do in other European leagues.

NO CENTRE BACKS, NO PROBLEM FOR GUARDIOLA
Pep Guardiola has never been short of options in a Manchester City squad rich with talent but an injury crisis forced him to play without a recognised centre back at Crystal Palace.

Guardiola has done it before at Bayern Munich and, with Nicolas Otamendi injured and John Stones still not fully fit, the Spanish boss deployed midfielders Fernandinho and Rodri in central defence.

City never looked threatened and Guardiola was delighted to see the duo come out unscathed in a 2-0 win, with their presence in the back four helping speed up their build-up play.

EVERTON WIN EASES PRESSURE OFF SILVA
Everton moved away from the relegation zone and up to 14th with a convincing 2-0 win over West Ham United and manager Marco Silva heaved a sigh of relief after a four-game losing streak was finally put to bed.

Booed after their last defeat, Silva made five changes to his starting line-up and the return of Andre Gomes in midfield certainly lifted the Merseyside club.

Bernard and Theo Walcott were lively on the flanks while Alex Iwobi also excelled in a playmaker role. They also kept their first clean sheet since August.

LAMPARD'S CHELSEA IN TOP FOUR
Chelsea's 1-0 win over Newcastle United was their fourth in five league games and it lifted the London side temporarily up to fourth.

Frank Lampard looks well and truly settled at the helm in a club where the squad has quickly lost faith in young managers in the past, with senior players giving the 41-year-old their backing.

"The team is getting better, we are improving game by game," goal scorer Marcos Alonso said. "We're doing a good job and we have clear ideas about what we want to do."