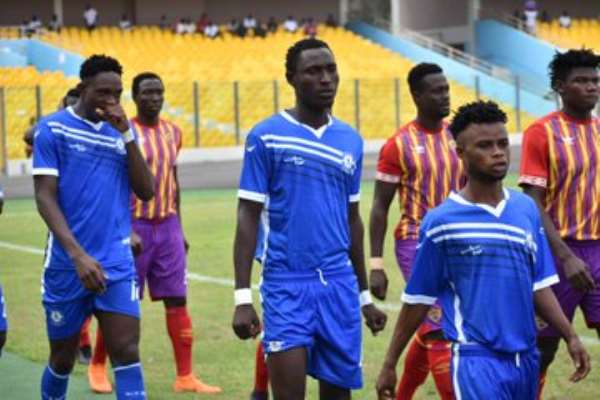 Head coach for Accra Great Olympics, Isaac Nii Armah has stressed that his team does not deserve to play in the Division because they are better than most of the clubs in the Premier League.

The Greater Accra-based club has been playing in Division One for the last couple of years following a brouhaha with the Ghana Football Association. Though they are still pursuing the case in court to see to their return to the top-flight, it looks unlikely.

Speaking in an interview on Sunday evening after losing to Hearts of Oak on penalties on the 2019 Homowo Cup, manager Isaac Nii Armah shared that his side should not be playing in the lower division looking at how well they play.

He continued, “It is just that maybe because of one or two issues that is why they find themselves there. But I believe that I am the right man for now because they have appointed me now and basically I was recommended by one of the top coaches we have here in Ghana. That is one of my father, David Duncan”.

Meanwhile, Coach Nii Armah is hoping that his time at Great Olympics will give him the experience he needs to handle any of the big clubs in the Ghana Premier League later in his career.

“It took Duncan to convince me to leave Bechem United to Olympics because at this age I need to pass through some of the traditional clubs to find it hectic and those things so that when am given the opportunity to coach a big club in the near future I don’t fumble”, he said.