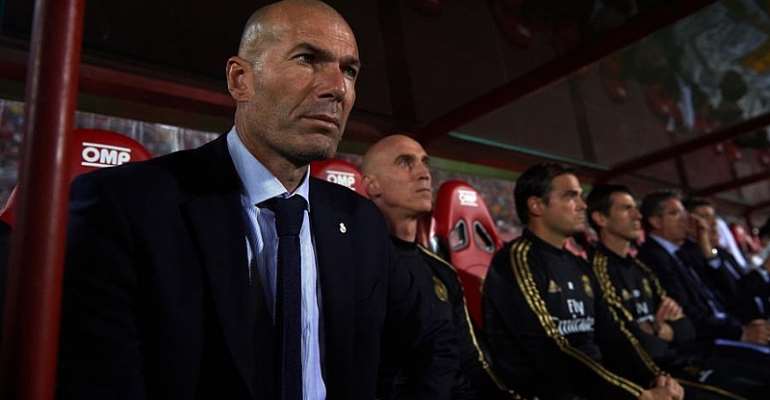 Zinedine Zidane said in April Real Madrid would prioritise La Liga over the Champions League this season and their defeat to Real Mallorca on Saturday suggests they may not have the squad to go far in both.

“For us next year, the league must be our No 1 priority,” Zidane said.

“It’s the longest competition, it’s the one that cannot be missed, and I’m going to put that in the heads of my players.”

Yet Zidane made several changes ahead of Tuesday’s Group A game away at Galatasaray and those who came in failed to impressed, with a blunt performance against Mallorca revealing familiar failings up front and causing Madrid to slip to their first league defeat of the campaign.

Some of the adjustments were enforced as Eden Hazard was absent following the birth of his fourth child on Friday while Toni Kroos, Luka Modric and Gareth Bale were all nursing injuries of varying severity.

Others were seemingly chosen as Raphael Varane and Dani Carvajal were rested, along with Fede Valverde, who had brought much-needed energy into the midfield before the international break.

Bale’s calf injury is believed to be minor but was considered too much of a risk and will also miss the trip to Turkey along with Ballon d’Or winner Modric.

Heavy rotation points to a belief in the utmost importance of the game against Galatasaray and a recognition from Zidane that Madrid cannot afford another misstep in Europe.

“The problem is we have to show every three days that we are good,” Zidane said on Saturday.

“That is our difficulty and that is what we do not do. We must have consistency. We have to have more life in our game if we want to do important things this year.”

INJURIES ‘PART OF FOOTBALL’
They sit bottom of the group, with just one point from their opening two games and the prospect of failing to make the knock-out stages for the first time in the Champions League still faint, but a possibility nonetheless.

It also suggests for all the good intentions about consistency in La Liga and wrestling back some of the domination enjoyed by Barcelona over the last decade, for Real Madrid the Champions League perhaps never plays second fiddle.

After all, it was in the Champions League that Zidane forged his reputation as a coach, three triumphs in a row almost eradicating from memory his more disappointing period in the domestic league and cups.

Zidane might have weighed up that there is time and games to recuperate in La Liga that do not exist in Europe but losing to Mallorca does not come without a cost.

After five games unbeaten, doubts have returned about his team and the spotlight is back on their Frenchman.

Perhaps he hoped for more from those that came in. Isco, Luka Jovic and Vinicius Junior were all taken off in the second half on Saturday and while Vinicus is young and Jovic recently signed, it remains to be seen how long it might take to regain Zidane’s trust.

Alvaro Odriozola, in for Carvajal at right-back, was at fault for the goal and then sent off.

“There were other players and we had to do better.”

When Madrid won the league under Zidane in 2017, he successfully rotated in games against lesser sides but, despite around 300 million euros ($300 million) spent last summer, his squad might not have the same depth.

Galatasaray have won only four of their opening eight Super Lig games and have not reached the Champions League last 16 since 2014.

But Madrid cannot be complacent, having lost three of their last four visits to the Turkish giants.

Zidane’s hopes of progress will be transformed with a victory but he might need his best players back to do it.