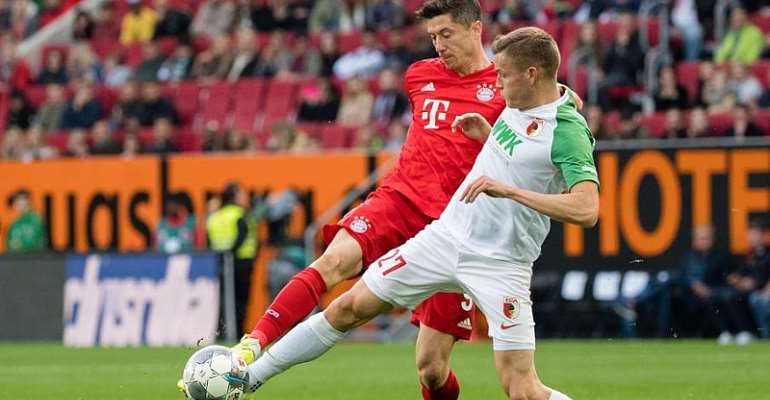 Niko Kovac's men sit one point adrift of both leaders Borussia Moenchengladbach and second-placed Wolfsburg, who drew 1-1 at RB Leipzig.

Gladbach face a difficult trip to Borussia Dortmund later on Saturday with a chance to move three points clear at the summit.

It was the second league match in succession that reigning champions Bayern had slipped up, having lost 2-1 at home to Hoffenheim before the international break.

Augsburg opened the scoring in stunning fashion, Marco Richter finding the net just 30 seconds after kick-off, the fastest goal of the season so far.

Richter took advantage as Bayern struggled to clear a bouncing ball deep in their own box. The 21-year-old sweetly struck a right-footed volley to grab a rapid lead – just as Augsburg had done in the corresponding fixture last year.

Bayern replied as Robert Lewandowski stretched his scoring streak to eight games in the 14th minute from a Serge Gnabry cross.

After a host of missed chances, former Arsenal winger Gnabry threaded the needle in the 49th minute to put Bayern 2-1 ahead.

But a strong, bullying run in injury time by Sergio Cordova on the wing set up Finnbogason, who finished past Manuel Neuer to earn a point for Augsburg and put another early dent in Bayern's title defence.

Thomas Mueller missed two chances after coming on as a late substitute after a week of controversy over the fact he has not started a game since September.