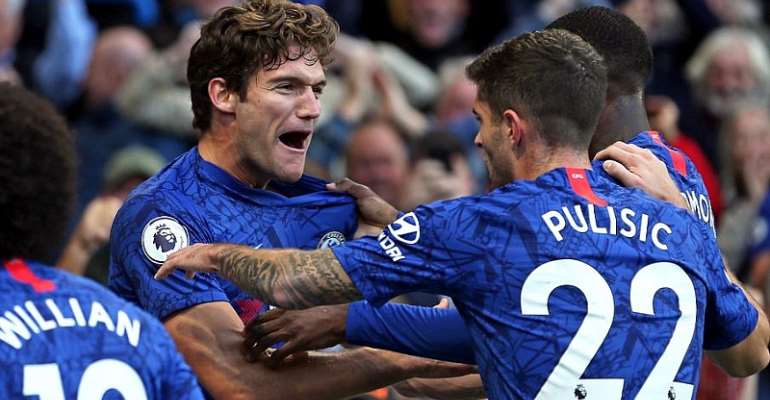 Chelsea climbed to third in the Premier League as Marcos Alonso clinched a 1-0 win that silenced the Newcastle fans who jeered the Spanish defender at Stamford Bridge.

Alonso's blistering strike ended Newcastle's stubborn resistance with 17 minutes left and provided the perfect riposte to the taunts from the stands.

The Chelsea left-back spent the second half of the 2013-14 season on loan at Newcastle's arch-rivals Sunderland and played in a derby win at St James' Park.

The Magpies supporters clearly hadn't forgotten as they booed him throughout Saturday's match.

But Alonso's first goal since April gave him the last laugh as Chelsea made it five successive victories in all competitions.

After winning just two of their opening eight games under Frank Lampard, the Blues are beginning to find their stride.

The mature way Lampard's young side kept probing and found a way to beat obdurate Newcastle bodes well for the future.

And for only the second time in Lampard's 13 games in charge, Chelsea kept a clean sheet as the Blues boss celebrated just his second home league.

While a title challenge is likely to be beyond Chelsea, they look well equipped to challenge for a top-four finish.

Newcastle have now won just one of their last 26 league visits to Chelsea after a defeat that punctured the momentum from their 1-0 win against Manchester United before the international break.

Fikayo Tomori, Ross Barkley, Mason Mount, Callum Hudson-Odoi and Tammy Abraham all featured for Chelsea, making it five English players in their starting line-up in the Premier League for the first time since February 2013.