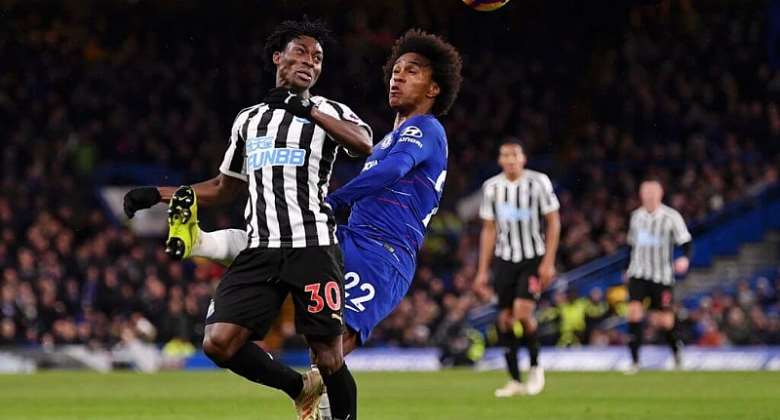 Pacey Ghanaian winger, Christian Atsu played a cameo role on Saturday afternoon when his Newcastle United side lost narrowly by 1-0 to Chelsea FC at Stamford Bridge.

Roy Hodgson and his men visited the London based club in hopes of causing an upset to ensure they returned home with at least a point to better their position on the English Premier League standings.

Impressive Frank Lampard and his young Blue army had a lot in their locker and prove too strong for the Magpies even though they had to struggle before getting the only goal of the match.

A first-half dominated by Chelsea ended goalless with the defense of Newcastle United standing firm throughout the entire duration even though they were constantly on the receiving end of an attack.

An improved second-half performance saw Spanish defender Marcos Alonso finding the back of the net on the 73rd minute to ensure the home team amassed all 3 important points.

Christian Atsu who was named on the substitute bench was introduced on the 82nd minute to replace Allan Saint-Maximin but could not have the expected impact.

The limited-time he had on the pitch was not enough for him to help Newcastle get anything out of the match at the end of the 90 minutes.