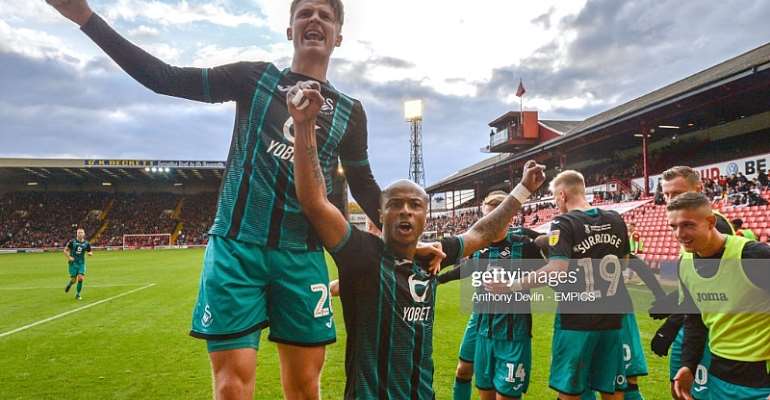 Ghanaian attacker, Andre Dede Ayew enjoyed a good day at the office and managed to find the back of the net on Saturday afternoon as his Swansea City side drew 1-1 with Barnsley.

The two teams locked horns on match week 12 of the English Championship at the Oakwell Stadium in hopes of bagging all 3 points but were forced to settle for a point apiece at the end of 90 minutes.

An evenly matched first half showing ended goalless with both sets of attackers constantly thwarted in their runs by the opposing defense.

The Swans who played as the away team resumed the second half with a good plan that produced the first goal of the match on the 67th minute. A good run of play was rounded up with a fine strike from Black Stars captain Andre Dede Ayew.

Their celebration could however not last as a lack of concentration proved costly for them just three minutes later.

Alex Mowatt saw his 70th-minute strike going into the back of the net to bring Barnsley on level terms.

The match eventually ended one all with Dede Ayew lasting 90 minutes. He now has 3 goals in the division and is hoping to score some more to help Swansea achieve their aim of gaining promotion to the English Premier League at the end of the season.