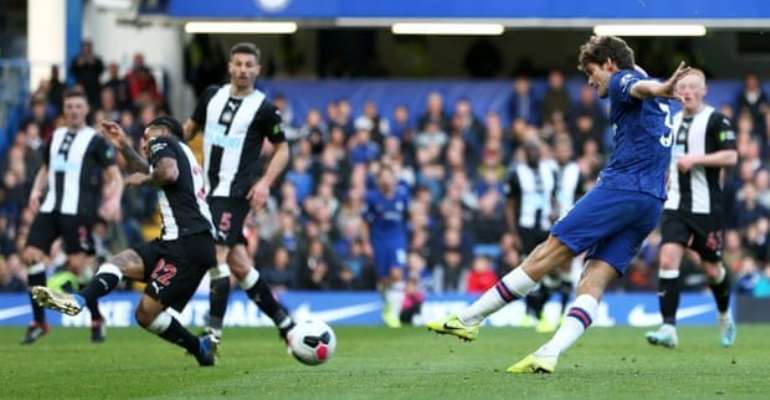 A 74th-minute strike from Spain wing-back Marcos Alonso earned Chelsea three points in a 1-0 win over a dogged Newcastle United in the Premier League on Saturday.

Slovakian goalkeeper Martin Dubravka had kept Newcastle in the game with a string of saves and got a hand to Alonso's angled left-foot drive but could not keep it out.

Frank Lampard's young side enjoyed 71% possession and earned 11 corners but until Alonso's goal could not make their superiority tell against a resurgent Newcastle, who defended in numbers and looked dangerous on the counter.

Hornets keeper Ben Foster flapped at a cross, with Alli controlling with his shoulder before turning the ball into the net.

The video assistant referee reviewed the goal and decided it was correctly awarded. The big screen, however, indicated that the decision was 'no goal'. After a spell of confusion, the goal stood.

It had looked like Mauricio Pochettino's side were going to suffer a fifth defeat in six games.

And they had a strong penalty appeal turned down by referee Chris Kavanagh and the VAR when Jan Vertonghen brought down Gerard Deulofeu.

In other games, Everton earned a 2-0 win over West Ham at home, Leicester City and Aston Villa were 2-1 winners against Brighton and Burnley respectively.

Bournemouth played out a goalless draw with Norwich and Wolves failed to build on their shock 2-0 win at Manchester City before the international break as they were held 1-1 by Southampton.