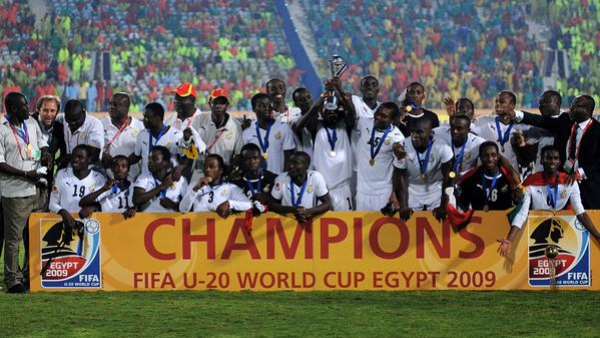 A member of Ghana's U-20 FIFA World Cup-winning team, Daniel Addo, has disclosed that he and his teammates are still owed by the Government of Ghana.

The Black Satellites defeated tournament favourite, Brazil 4:3 on penalties to become the first African country to win the trophy in Egypt.

According to him, a portion of their bonuses due them after winning the FIFA U-20 World Cup was invested by ex-President John Evans Atta Mills led government.

It was understood the investment would mature between 10 to 15 years, but they are yet to be given a progress report on the investment, despite inquiring about it.

Daniel Addo
“One thing I’m worried about is the investment that was done in our names, I pray we are remembered when the time is due for the collection of the investment.

“I have a certificate to that effect and that U20 squad, we do have our WhatsApp platform and we do discuss about it.

“We actually took a step but the response wasn’t encouraging. The investment is for a period of 10 to 15 years and we were told by the then President of Ghana about it.

“But when we inquired it wasn’t like that, it’s rather a period of 15 years. We just want to know how far the interest has gotten to.

The defender also expressed his disgust upon hearing a journalist blaming them for requesting for their money.

“I wasn’t happy when I heard a journalist claiming that we are requesting for the money because some of us have a truncated career.

“We took the words of the president, but things are proving to be something else. If some of the money is given to insurance companies then some of our teammates who've suffered injury should have benefited from it.” he bemoaned.

Daniel Addo was with Kumasi based King Faisal during the 2009 FIFA U-20 World Cup in Egypt.