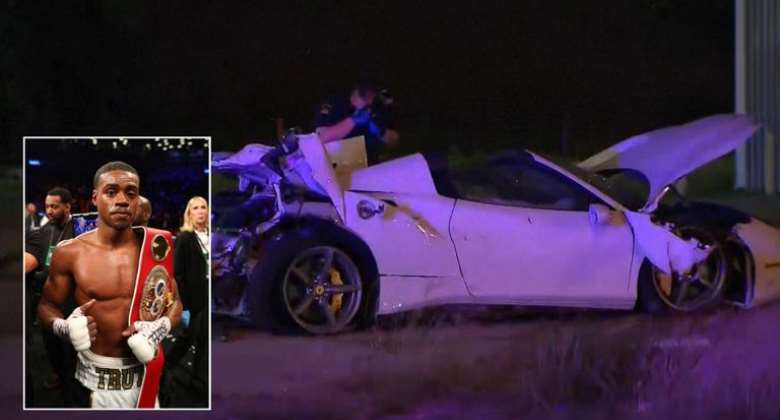 IBF/WBC welterweight champion Errol ‘The Truth’ Spence Jr. is being charged with a DWI [driving while intoxicated] for his crash of his Ferrari last week on October 10, according to Lance Pugmire.

The DWI is a misdemeanour. The Dallas Police won’t be getting the speed of Spence’s vehicle at the time of his car crash. Spence has been released from the intensive care unit from the hospital.

The 29-year-old Spence was thrown from his Ferrari during the crash and somehow got out of the accident suffering any broken bones or major injuries. Spence wasn’t wearing a seat-belt at the time of the accident. Fortunately, Spence and no one else was seriously injured by his horrific car crash. In looking at video of the crash, it looks really bad. If anyone had been in the vicinity of the accident, they could have been hurt.

Following his accident, Spence was in the intensive care unit in Dallas, Texas.

The Dallas police said Spence’s Ferrari was “travelling at a high rate of speed” and then “veered left over the centre median onto the southbound lanes and flipped multiple times, ejecting the driver, who was not wearing a seat-belt,” according to ESPN.com.

It’s unclear how all of this will affect Spence’s boxing career. Before all this occurred, there was talk of Spence returning to action in January to defend against Danny ‘Swift’ Garcia. Not too many boxing fans want to see Spence fight Garcia, as they prefer to see him face Terence Crawford, Manny Pacquiao or give Shawn Porter a rematch. Spence narrowly beat Porter by a 12 round split decision on September 28.

It does without saying that the automobile accident is a public relations nightmare. Spence wants to become a superstar in boxing, but what he doesn’t need it to be seen as a guy that is crashing cars and getting DWIs. Spence is a role model for a lot of young boxing fans that look up to him, but this isn’t a good look for him.