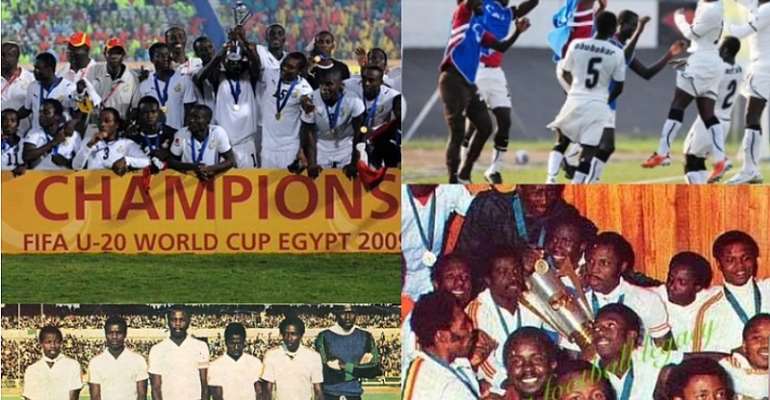 Ghana have suffered several penalty heartbreaks, but these are the few moments the West African country were the happier side after a shootout in a final.

Black Stars-1982
The Black Stars defied all odds to beat Libya, the hosts nation 7-6 on penalty shootout to win the 1982 Africa Cup of Nations trophy in front of their intimidating home fans.

Ghana shot into the lead in the35th minute through George Alhassan, the oldest player in the Black Stars during the tournament, but the Libyans with defeat smiling at their face threw everything upfront and succeeded to cancel the lead in the 70 minutes through Beshari.

The rest of the minutes played couldn’t produce any further goal, so the referee ushered the two sides into the first ever tie breaking exercise in a final to be decided on penalties. In the shootout, Sampson Lamptey, George Alhassan, Isaac Paha, Abbrey and Asase scored, in the 1st round, while in the 2nd round of the shootout Owusu Mensah saw his penalty saved by the Libyan goalie, but he also saved a 6th penalty kick by the Libyans. Owusu Mensah, again saved the Libyans 7th penalty to help Ghana win its 4th AFCON.

Ironically Owusu Mensah went to the tourney as Ghana’s third goalie, but turned out the hero of the tourney. George Alhassan who was the oldest player in the Stars team won the golden boot and hence most reporters termed the tournament “George’s African Cup”

Ghana on their way to their fourth title, drew 2-2 with the hosts nation, Libya who were making their debut in the competition, before they drew 0-0 against Cameroon and registered a 1-0 win over Tunisia to advance from the group stage.

In the semifinal, Ghana survived from fought from two goals down to beat Algeria by 3-2 in extra time through two goals from George Alhassan ( 64 and 103) and a goal from Opoku Nti (90).

Note: Hadn’t been the 1982 coup detat that toppled the Limann’s government, Ghana wouldn’t have participated in the 1982 AFCON, due to diplomatic reasons and financial constraints. When the new government led by Flt Lt J.J Rawlings, the chairman of PNDC, took over, he insisted that Ghana should participate.

Teenager, Abedi Pele, who would later become the first footballer to win the African Player of the Year on three consecutive occasions was also in the thick of events during the tournament and even had a part to play in the grand finale.

Black Stars in Libya
The Black Stars of Ghana defeated the Hawks of Togo 4-3 on penalties to win the 1984 WAFU Championship after the 90 minutes of duration time ended one-all.

The African and South American champions, who had not lost a game during the competition, keep that proud record intact, but at the end of the day, it was the Black Satellites, who followed in the footsteps of Argentina, victors at Canada 2007, in lifting the famous trophy.

Brazil had the better of the early stages and went agonisingly close to taking the lead early on when Giuliano's free-kick was put into the box and Alex Teixeira was inches away from connecting with a header. Giuliano prompted A Seleção once again, playing the ball to Paulo Henrique on the left who crossed for Alan Kardec, but his volley was wide.

Douglas stung the hands of the goalkeeper with a shot from distance, but the major talking point of the first half came in the 37th minute when David Addo was given a straight red card for a foul on Alex Teixeira after the latter was breaking quickly on the counter-attack. While the Belgian believed Addo to be the last man, the Africans protested that both Jonathan Mensah and David Addy had tracked back to cover.

Ghana, who boasted the tournament's most prolific strikeforce in Dominic Adiyiah and Ransford Osei failed to muster a single shot on goal in a stop-start opening 45 minutes, punctuated by no fewer than 17 free-kicks, yet this was not the bruising encounter those statistics may suggest.

Abeiku Quansah had a goalbound shot saved four minutes after the break, but it was a routine stop for Rafael as Brazil did most of the pressing. Alex Teixeira should have done better, but headed wide from Diogo's centre and Alan Kardec had a golden opportunity, but headed straight at Daniel Agyei from Souza's cross.

As the midway point to the second half approached, Ghana had more possession, but still Brazil looked the more dangerous. Rafael Toloi slipped a perfectly-weighted pass for Alan Kardec to latch on to, but he fired wildly into the side netting. The No9 was guilty of missing yet another chance seconds later when he planted a free header from Douglas Costa's cross over the crossbar.

There was no doubt who the 67,814 in the stadium were supporting, as there was a tremendous roar from the home fans whenever their fellow Africans crossed the halfway line and the noise levels increased further when Emmanuel Agyemang-Badu's deflected shot forced Rafael to make a fine, low save to his right.

As the half wore on, the Black Satellites seemed to increasingly get into their rhythm of playing with ten men and their attacking forays became more and more regular, while at the back they defended with tremendous spirit. They earned the right to take the tie into extra time, but there was still drama to come in the latter stages of the 90 when Andre Ayew and Rafael Toloi clashed for the ball, the latter requiring serious treatment.

With Rogerio having made all three of his substitutions, there was a distinct possibility that Brazil would have been forced to play extra time with ten men. Yet despite running with a noticeable limp, the defender continued heroically to maintain the numerical advantage for his team.

The South Americans had a glorious chance to take the lead six minutes into extra time, but Agyei pulled off a world-class save to deny Maicon, who still had his hands cupped to his mouth in disbelief for a full minute afterwards.

Agyei frustrated Wellington Junior in the second period of extra time, with a smart stop at his near post, but with some players having played 11 and a half hours during this competition, the pace of the game decreased - and the game limped into a penalty shoot-out.

That is when the fireworks began. First, Alan Kardec and Ayew and Giuliano and Inkoom traded successful penalties, but Brazil got the first advantage after seeing Douglas Costa score and Jonathan Mensah miss. Souza then had his penalty saved, but Bright Addae failed to reduce the deficit when his strike from 12 yards was comfortably claimed by Rafael.

That left Maicon with the chance of winning it for Brazil, but he blasted the chance high over the bar. Adiyiah kept his cool to take the shoot-out into sudden death. Then Agyei denied Alex Teixeira before Agyemang-Badu made the victory certain with the decisive spot-kick.

Meteors-All-Africa
Ghana beat South Africa 4-2 on penalties to win the 2011 All Africa Games after both team tied 1-1 after regulation time.

South Africa opened the scoring in the 86th minute through Eugene who struck inside the box after goalkeeper Daniel Agyei's save hit his chest and dropped in front of the on-rushing striker.

The Black Meteors never gave up and drew level added on time from the spot in what looked like a dubious penalty call by the referee.

Hearts of Oak striker Mahatma Otoo made no mistake and snatched the equalizer to push the game into extra-time.

Both sides failed to score after 120 minutes action and Ghana converted all four of their kicks while the Amagluglug missed two out of four kicks.

The feat also comes as a boost for local coaches as Akwasi Appiah's achievements with the team will restore their image.

Ghana FA boss Kwesi Nyantakyi will also get some of the credit for leading the country into the right direction having won Africa's first U20 World Cup title and also sending the Black Stars to the World Cup for the first time.

Before South Africa went ahead, substitute Mumuni Abubakar was fouled after receiving a pass from Mahatma Otoo.

Morton teed up Otoo who unleashed a screamer which smashed the cross-bar with goalkeeper Brilliant Khuzwayo completely beaten.

Ghana could not take advantage of the rebound as Prince Baffoe shot wide.

Before the first half of extra-time, goalkeeper Khuzwayo managed to keep South Africa's hopes alive by pulling a great save.

Ten minutes away from the final whistle, striker Eugene made an audacious attempt from 25 metres but that was always rising.