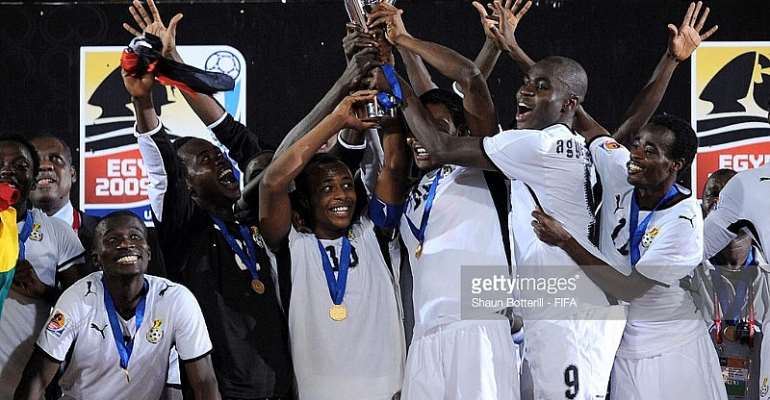 Ten-man Ghana beat Brazil 4-3 on penalties after there were no goals in 120 minutes of action to become the first African team to win the FIFA Under-20 World Cup in Cairo, Egypt on Friday night.

Maicon would have won it for Brazil when the score stood at 3-2 only for him to blast his kick wide. Tournament top scorer Dominic Adiyiah then drew Ghana level at 3-3, before Alex Teixeira had his kick saved. Emmanuel Agyemang-Badu then sent his spot-kick into the back of the net to give an African team their first Under-20 World Cup trophy.

This was only the second U-20 World Cup final to be decided by a penalty shoot-out, and for the Black Satellites, it was third time lucky as they had lost the final in 1993 and 2001.

This final, played in front of over 67,000 fans at the Cairo International Stadium, dragged into extra-time after Brazil controlled the match from start to finish but poor marksmanship combined with some resolute defending by Ghana ensured there were no goals in normal time.

Brazil got off to a bright start during which Dalton swung a free header off target after just three minutes.

Ghana, on the other hand, appeared a bit nervous and could hardly express themselves as they have done so well in their previous matches at this tournament.

After 20 minutes of action, Brazil had four attempts at goal, while the opponents could not boast of even one.

In the 24th minute, Brazil goalkeeper Rafael rushed out of his goal to deal with a corner from which Mohammed Rabiu headed wide of the target.

Three minutes later, Brazil's danger man Alex Teixeira was booked for controlling the ball with his hand on his way to goal, before Ghana's central defender Daniel Addo saw a straight red for bringing the same player down as he headed towards the penalty area.

The Black Satellites of Ghana began to get back into the game after the halt-time as Brazil continued to dictate the pace.

Skipper Guiliano's diving header on 50 minutes caused some confusion inside the Ghanaian 18-yard box, but the West Africans somehow scrambled the ball out for a corner.

Brazil's Alan Kardec came close to breaking the deadlock in the 58th minute only for his diving header from inside the box to be cuddled by goalkeeper Daniel Adjei. Television replays later showed the Brazilian striker had helped the ball on with his hand.

Ghana striker Ransford Osei was replaced after 65 minutes by defender, Ghandi Dassenu, as the Black Satellites tried to stem the tide of Brazilian attack.

Another glorious chance fell for the tall Kardec in the 70th minute but he failed to direct his header at goal to the relief of the African champions.

Brazil continued to attack with substitutes Maicon and Douglas Costa making use of the flanks to open up the Ghanaian defence, who to their credit kept their shape and discipline despite wave after wave of attacks.

In extra-time, both sides had chances to break the deadlock, Maicon, Douglas Costa and Wellington Junior for Brazil, while Ghana's Rabiu saw his long-range shot after 100 minutes go wide of the mark.