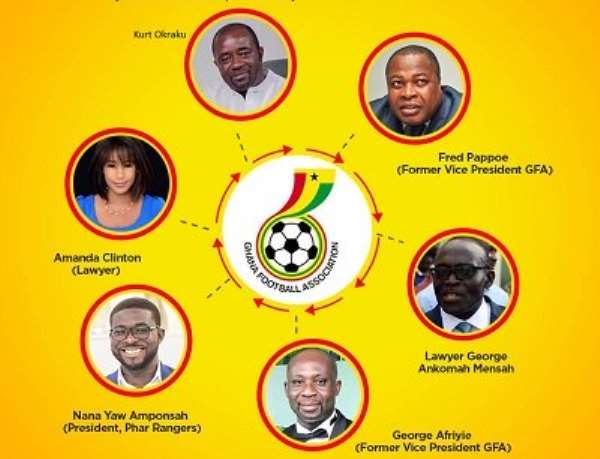 The Normalization Committee (NC) has through a statement confirmed that they will be organizing a debate for all 6 Ghana Football Association (GFA) presidential candidates on Monday, October 21, 2019.

After months of work by the NC which was set up by FIFA and the government of Ghana to reform football in the country following a Number 12 expose by Anas Aremeyaw Anas, the football community is heading towards an election period this month to elect new executives as well as a new president.

Having recently been grilled by a vetting committee set up by the NC, they now have to brace themselves for a debate which will be aired on television as well as radio.

The exercise is being organized by the interim body in partnership with broadcasting giants Ghana Broadcasting Corporation, Global Media Alliance, and Multimedia Ghana Limited.

The debate will be broadcasted live from the Physicians and Surgeons Centre in Accra at 18:30GMT and will be aired on GTV, Joy FM, Happy FM, as well as all affiliate media platforms including online as well as social media of the three media partners.

Below is a statement from the NC giving insight of the upcoming presidential debate;

The Normalisation Committee of the Ghana Football Association will, in partnership with three media organisations: Global Media Alliance, Multimedia Ghana Limited and Ghana Broadcasting Corporation, organise a live radio and television debate for five of the six Presidential Candidates of the upcoming GFA elections.

The debate will be held on Monday October 21 at the Physicians and Surgeons Centre in Accra at 6:30 p.m. It will be broadcast live on GTV, Joy FM, and Happy FM, as well as all affiliate media platforms (radio, television, online, social media) of the three media partners.

The GFA Presidential debate will focus on key areas affecting the development of Ghana football and questions would seek to elicit solutions-based responses from the presidential candidates.

Five out of the six presidential candidates have confirmed their participation in the debate. They are: Amanda Clinton, Fred Pappoe, Kurt E.S. Okraku, Nana Yaw Amponsah, and George Ankomah Mensah.

The Normalization Committee wishes the candidates well and appreciates and applauds their willingness to engage the delegates, football community and the fans and supporters of football with their vision and programs for improving the football enterprise of Ghana.

Their preparedness to debate each other as candidates for the top position of the GFA is refreshing and indicates their embrace of candor and the power of new ideas as essential in the reformation process.

Kudos and good luck to the candidates and to a new Ghana Football Enterprise.

High Court shoot down Agordzo's application to travel
20 minutes ago

ASEPA to file RTI request for minutes of Justice Dotse-AG 'S...
20 minutes ago