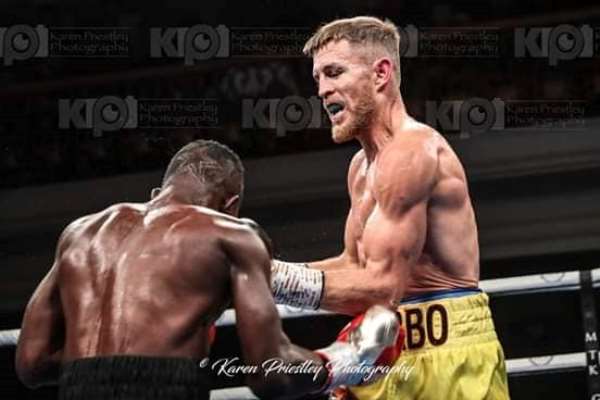 Terry ‘Turbo’ Flanagan registered his second straight win, the latest coming when Ghana’s Michael Ansah was disqualified in the fourth round of their preliminary bout Friday evening at Ulster Hall in Belfast, Northern Ireland.

Ansah had a rough go of it, losing a point in round three and drawing another stern warning before finally getting the hook in round four, all due to hitting on the break on each occasion.

Prior to the disappointing ending, Flanagan was well in control though not showing any real sense of urgency against his overmatched foe. The 30-year old southpaw from Manchester, England steadily worked behind his jab, mixing in long left hands and having his way with Ansah whose only game plan seemed to be roughing up the former titlist on the inside.

It worked only to the point of frustrating Flanagan and referee Hugh Russell Jr., the latter who grew increasingly frustrated with the visiting boxer’s dirty tactics. Several warnings and unnecessarily harsh shoves by the third man resulted in a point deduction from Ansah’s card in round three.

Flanagan did his best to remain focused but the flow of action was slowed to a crawl due to frequent clenching and fouling. It became clear that Ansah (17-11-2, 11KOs) wasn’t interested in adhering to the rules, ultimately prompting an abrupt end to the contest at 2:58 of round four.

The bout aired live on ESPN+ in the United States and globally on IFL TV, coming in supporting capacity to a flyweight between Jay Harris (16-0, 8KOs) and two-time Olympic Bronze medalist and local favourite Paddy Barnes (6-2, 3KOs).

FixingTheCountry Movement to march in support of Akufo-Addo'...
35 minutes ago