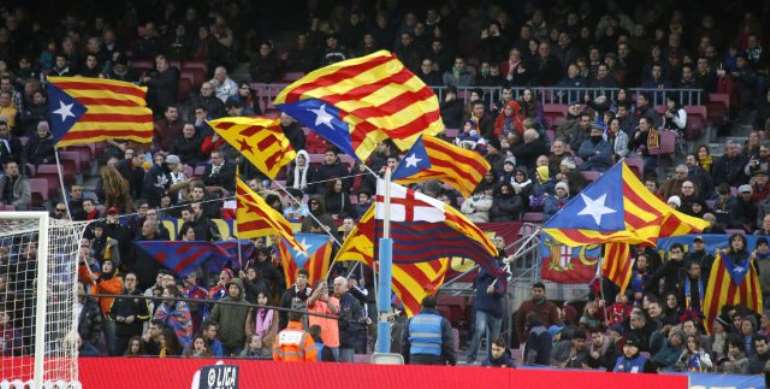 Barcelona have announced their support for the nine separatist leaders from Catalonia handed prison terms of between nine and 13 years over their role in a failed bid for independence from Spain.

The Spanish champions said "prison is not the solution" and called on political leaders to engage in dialogue to resolve the ongoing conflict.

All nine defendants had been held without bail for almost two years and were sentenced on Monday. They were all acquitted of the gravest charge, rebellion, but were found guilty of sedition. Three other defendants were found culpable of disobedience but were not handed jail terms.

The landmark ruling in Spain relates to a 2017 referendum on independence, which was deemed illegal by central government, organised by Catalan politicians and civil leaders.

"In the same way that the preventive prison sentence didn't help to resolve the conflict, neither will the prison sentence given [on Monday], because prison is not the solution," Barca said in a statement.

"The resolution of the conflict in Catalonia must come exclusively from political dialogue.

"Therefore, now more than ever, the club asks all political leaders to lead a process of dialogue and negotiation to resolve this conflict, which should also allow for the release of convicted civic and political leaders.

"Barcelona also expresses all its support and solidarity to the families of those who are deprived of their freedom."

Elsewhere, the Catalan Football Federation announced all activity on Monday had been suspended, while La Liga side Espanyol, based in Barcelona, and second division side Girona also released short statements.

Espanyol said that they "respected the court's decisions" but regretted the situation and, like Barca, called for dialogue to help find a solution.

Girona's response was much stronger: "The club, which has always defended freedom of expression and the right to decide, rejects the sentences. They will not resolve the situation, which requires a political solution.

"Girona back a process of dialogue and negotiation between all parties. This process must include the liberation of the condemned civic leaders and politicians, who have been unjustly jailed for the last two years."

The referendum, which took place in October 2017, resulted in an overwhelming win for the separatists and led to a short-lived independence declaration. However, the vote was marred by violence between Spanish police, who were trying to shut the ballots down, and the general public.

As a result of the trouble, Barca opted to play their game that day, a league fixture against Las Palmas, behind closed doors at Camp Nou.

An emotional Gerard Pique, who voted in the referendum, described the match as the "worst experience" of his professional career.

Barca have avoided positioning themselves on either side of the independence date, but Monday's statement is not the first time the club has stepped into the debate.

In 2013, they allowed Camp Nou to be used for the Concert for Freedom, which demanded self-determination for Catalonia and other nations around the world. Later that same year, on Sept. 11, Catalonia's national day, an independence march was allowed to pass through the club's stadium.